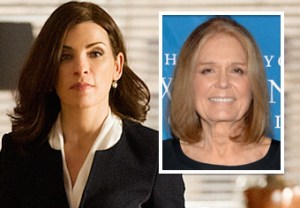 The Good Wife, already a veritable Justice League of impressive women, is welcoming one more in its sixth season.

Renowned journalist and feminist Gloria Steinem has been tapped to appear as herself in an upcoming episode, star Julianna Margulies announced Wednesday on Live With Kelly and Michael. Though no further details about Steinem’s cameo are available, Margulies admitted to getting a little too starstruck while filming.

“I made a fool of myself and then had to email her and had to apologize,” she revealed.

* MTV’s Faking It has tapped Derek Mio (Greek) to guest in a Season 2 episode as Karma’s brother Zen, TVLine has learned exclusively.

* TBS’ Ground Floor won’t be hosting a Scrubs reunion, after all. Christa Miller was originally cast as the wife of John C. McGinley’s character, but the role has since been recast. Emily Rutherford (The New Adventures of Old Christine) will now be playing Mrs. Mansfield, EW is reporting.