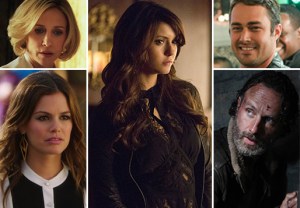 Question: I’m still Team Stelena on The Vampire Diaries. Is there any hope? —Allison
Ausiello: Never give up hope, Allison! Elena’s emotions are all over the place in Season 6 and I have it on good authority that her love life is going to be far from dormant. In fact, I hear she’ll be locking lips with a handsome fella in Episode 3 — and his name does not rhyme with Shmamon.

Question: Any intel on Nina Dobrev’s crossover to The Originals?  —Jacob
Ausiello: How’s this intel for you, Jacob? When asked if Tatia’s scenes with Elijah and Klaus would be “steamy,” or if they’d be all talk, Nina Dobrev answered, “A little bit of both, in different capacities. … I’m always going to be in a love triangle. I can’t escape it, so I might as well just accept it.”

Question: Will we learn in the upcoming Originals flashbacks with Kol about why he used to hang around the witches? —Tom
Ausiello: The flashback stories will kick in as early as Episodes 2 and 3, but it remains to be seen if that particular mystery will be answered. As for what will be explored, “You’re going to get see a little bit more of how the Originals wound up leaving Europe and coming to America,” executive producer Michael Narducci previews. “There’s definitely a reference to some things that we mentioned on Vampire Diaries, especially in the teaser of [Episode 2].” The EP also hints that we’ll learn how Kol came to be daggered.

Question: Hey, Ausiello. We’ve heard a lot of spoilers about Hayley, Klaus and Elijah on The Originals, but do you have any spoilers about Camille, her love interests and her role this season? —Mel
Ausiello: Despite trying to distance herself from the supernatural, Cami will get pulled back in thanks to her friendships with Marcel, Josh and Davina. Plus, she’s feeling a bit guilty over baby Hope’s death “because she didn’t act fast enough, she didn’t embrace the inheritance that Kieran left for her,” Narducci explains. “She feels a certain amount of responsibility. Now she’s thinking, ‘If I don’t get involved, maybe Davina’s going to wind up in trouble. If I don’t get involved, maybe Klaus is going to spiral out of control.'”

Question: Can you give me any spoilers on The Walking Dead? —Nancy
Ausiello: I had to watch the first six minutes of the Season 5 premiere with a Trapper Keeper in front of my face — it was that gruesome. I’m shocked AMC’s Standards and Practices signed off on it, to be honest. In related news, click here for my in-depth 140-character review of the episode.

Question: Any Chicago Fire spoilers? —Allyson
Ausiello: Look for Severide to jump into a seemingly “impetuous and ill-advised” romance with a new bombshell named Brittany (played by Graceland‘s Serinda Swan), previews showrunner Matt Olmstead. “Everybody’s looking at them sideways like, ‘Where’d this girl

come from?'” As the EP notes, “It’s another extension of Severide [grabbing] the next distraction to keep him from dealing with the Shay of it all. The secret, which is ultimately revealed, is that [Britt] has also run away from a tragedy in her life.” Ultimately, the relationship will allow Severide “to deal with what happened to Shay and put two feet on the ground.” (Programming note: Swan makes her Chi Fire debut on Oct. 28.)

Question: I’m still devastated about Sweets’ death and would absolutely love some happy Bones scoop you have. —Amelia
Ausiello: Wendell isn’t going to die! As EP Stephen Nathan strongly hinted in last week’s premiere post mortem, it’s highly unlikely the show will kill off two major characters in one season. (The title of the show is Bones, not Game of Thrones.) That said, Nathan confirms that Wendell’s cancer battle will “definitely be revisited” this season. “We’ve already done the first episode dealing with that,” he notes, “and that will continue for a few more episodes.”

Question: Bones! What’s upcoming for Booth and Brennan outside of the conspiracy arc? —Kay
Ausiello: The big 200th episode — and here’s another clue about the premise of the milestone outing per Mr. Nathan: “They’re all going to be playing their characters, but in a different world and situation.” And he goes on to reiterate that this is not an “alternate reality” situation.

Question: I want Nashville scoop! —Chris
Ausiello: Zoey’s definitely not going to be happy when Kiley (played by Spy Kids‘ Alexa PenaVega) comes to town in the Oct. 8 episode; after all, would you like it if your boyfriend’s ex showed up with a kid that might be his? Plus, consider this less-than-comforting scoop from showrunner Dee Johnson: “There’s a lot of water under the bridge between them, and Gunnar’s in a very different place in his life now than he was when he knew her way back when.” She adds: “She’s initially pretty threatened.”

Question: What will Mary and Francis’ reunion be like on Reign after the way he left? — Bree
Ausiello: As you can imagine, Bree, “complicated” doesn’t even begin to describe Francis and Mary’s relationship in Season 2. “There is a connection between Francis and Lola, and he has to have a civil relationship with her, but he’s determined to show Mary that he cares about their relationship more than anything — and he does that through sex,” Toby Regbo says. “He just throws sex at his problems until they go away.”

Question: Hey, I’m Kyle! Do you know if Witches of East End will get a third season? I’m just the biggest fan. This is my new Charmed! —Kyle
Ausiello: No need to introduce yourself up front, Kyle. Tacking it on at the end of your question is all that’s needed. Now, about a third season of Witches: No decision has been made. But Madchen Amick (AKA Aunt Wendy) promises that “a lot of the foes that have been haunting us and a lot of the storylines will be wrapped up [in Sunday’s two-hour finale].” In regards to Wendy’s line about being willing to “risk anything” for the people she loves, Amick chooses to play coy: “Something pretty big does happen, but I can’t tell you. I might have to kill you.” (Start your prayer circle now.)

Question: What is with this midseason finale stuff on Outlander? When will we get it back? And got any scoop? —Cherlynn
Ausiello: Did one of the Craigh na Dun stones fall on top of you, Cherlynn? The Starz series announced its return date last week. As for scoop, exec producer Ron Moore tells TVLine that shooting the culmination of Season 1 involved some “grueling, difficult scenes.” (Anyone who hasn’t read the book and doesn’t want to be spoiled, skip to the next question now.) Jamie finds himself the prisoner of Black Jack Randall, who tortures and humiliates him in Wentworth Prison. “There were a lot of hours spent in that cell. There’s a lot of rough stuff happening,” Moore says. “Just from the dailies, you can tell that it’s pretty amazing. It’s pretty intense stuff, and I think it’s going to really surprise people.” What about the herd of livestock that makes an appearance at a key point in the narrative? “We did wrangle some cows,” Moore affirms with a laugh. BONUS SCOOP: Though Jamie’s father, Brian Fraser, appeared for a millisecond in “The Garrison Commander,” he was not introduced. That will change in the second half of Season 1. “There will be a flashback in a subsequent episode where we will revisit that episode at Fort William, and we’ll identify Brian more clearly,” Moore says. Question: Any scoop on Sons of Anarchy? —Chelsea
Ausiello: Exclusive casting news coming your way in 3, 2, 1… English actor Luke Massy (AKA Frost Giant Raze in Thor) is joining the cast in the recurring role of Otis, a tough Aryan Brotherhood leader who wants to be put in charge but has a few obstacles to get through.

Question: Some Sleepy Hollow scoop, please? —Becca
Ausiello: Next week’s hour spotlights money that has really bad mojo. “There’s a coin that Henry puts into circulation around Sleepy Hollow that starts turning people against the ones that they love and they start killing each other, as well,” Tom Mison tells TVLine, adding that the cash has ties to at least two other severely bad moments in human history. Oh, and the Mills sisters will fall under its evil spell.

Question: Anything Ichabod-related from Sleepy Hollow would be more than welcome, thanks. —Jane
Ausiello: Ichabod’s finally learning how to drive! In an upcoming episode, “We see Ichabod and Abbie swap seats,” says Mison, who recently got his own first driver’s license and admits that his lack of experience was evident during production. At one point, the show’s stunt coordinator hopped in the passenger’s seat to talk Mison through a sequence where he was the only person in the shot. “I made one of the leading stunt coordinators on the East Coast whimper,” the actor reports, laughing.

Question: My mother and I are huge Bates Motel fans. Got any scoop on Season 3? —Kornelia
Ausiello: Loads. For instance, even in the wake of Gil, Zane and Nick’s demises, the show won’t be short on nefarious baddies. Among the new crop of recurring connivers we’ll meet are middle-aged Chick Hogan, a tough guy who makes his living running a bike shop dealing in illegal firearms and seems bound to run afoul of neighbor Dylan and his dad/uncle (duncle?), Caleb; and Bob Paris, a fancypants old (read: former) pal of Romero’s whose business is shady enough that it comes with its own “fixer,” menacing Adrian.

Question: I wanted to know what spoilers you can tell me about Pretty Little Liars or Bates Motel... or both! —Megan
Ausiello: Both? You’ll take Bates Motel intel, and you’ll like it. And that intel is… it looks like Dylan’s getting a new love interest, since the show is searching for a sexpot to play Annika Johnson, whose chill attitude and rockin’ bod can’t disguise her guilty conscience. Question is: What is she guilty Of?

Question: Is the Leo-Emma-Jordi triangle going to be an ongoing source of drama on Red Band Society?
Ausiello: I can answer your question in two words: Mmm. Hmm. But I’ll let series star Charlie Rowe, who plays Leo, flesh out the details. “We are shooting the last couple days of Episode 6,” Rowe reveals, “and things are escalating. We’re almost at the point where a decision is being made in terms of the triangle — and who wins who. There’s a lot of anger and upset involved from both guys, but it’s getting good and juicy.”

Question: New Girl is off to a strong start this season – almost makes me forgive them for Season 3. Can you tease anything fun coming up? —Steve
Ausiello: There’s an episode on the horizon that has fun written all over it: Jess & Co. realize they have a bag of meth in the apartment and they have to hide it when an officer comes to do a background check on Winston.

Question: Aus, do you have anything to share for Hart of Dixie? —Nicole
Ausiello: A few weeks ago, Matt Mitovich regaled you with a little ditty about Dixie adding a character that sounded like the 2.0 version of Rachel Bilson’s Zoe. Well, allow me to welcome you to Dixie‘s upcoming O.C. reunion, bitch, because Autumn Reeser got the role! (The actress took advantage of the 60 seconds I had my guard down yesterday and broke the news herself.) ICYM MM’s Inside Line item on the character, Reeser will play Olivia, a very attractive, fashionable and quick-witted New York attorney struggling to make sense of life in BlueBell. She’s set to appear in the Season 4 finale.