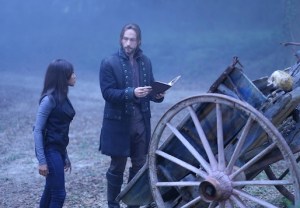 Remember when Ichabod and Abbie’s biggest problem was just a horseman without a head? Wasn’t that cute?

This week on Sleepy Hollow, the Witnesses do battle with not one but two harbingers of the apocalypse — at the same time — and must resurrect one of Benjamin Franklin’s most ambitious creations in order to stay in the good-vs.-evil game.

The fight (and Franklin’s Frankenstein-like behemoth, which is called The Kindred) are tough; what’s ahead for Mills, Crane and an imprisoned Capt. Irving is tougher. The hour finds Ichabod and Katrina having distinctly different ideas about how to stop their embittered son, a theme star Tom Mison says will resonate for time to come.

“Every character is full of doubt this season, particularly Ichabod with Katrina, with how to deal with Henry,” the actor tells TVLine. “Also, that’s Henry’s path. [The Horseman of] War could come with guns a-blazing, but it’s not that sort of war. It’s more that Henry is going around, planting these seeds of doubt in every character in order to tear them apart.”

And in Ichabod, Henry will have plenty of fodder, given that Katrina lied (ostensibly in everyone’s best interest) about being a witch and being Washington’s spy, for starters.

“That, obviously, will raise up questions — particularly coming from Abbie — of how much can we trust Katrina?” Mison says. “It’s a really good way to avoid the whole damsel-in-distress bit. And it’s nice; we get to see more of Katrina’s potential.”

Meanwhile, remember how series co-creators Robert Orci and Alex Kurtzman told TVLine that Ichabod and Abbie’s bond is “obviously going to raise a lot of questions” for Mrs. Crane in the coming season? Prepare for that to start this week.

“It’s a very clever way of dealing with bringing Katrina and Ichabod back together,” Mison says of the Cranes’ current marital strife. “Start it on a potentially bad foot.”

Speaking of marriage trouble, danger and bleak futures, Irving’s back!

Orlando Jones says when we first encounter the captain — who, you’ll recall, confessed to two murders in order to protect his then-demonically-possessed daughter Macey — prison life is not agreeing with him.

His replacement, Leena Reyes (House of Cards‘ Saking Jaffrey, who makes her debut this week), really doesn’t want her predecessor mixing it up with Mills and Crane… or anyone. In fact, Irving’s isolation plays directly into evil’s bigger plan, leading to a twist at the end of the episode that sets up some very bad business for the weeks ahead. (Suffice to say, Irving’s ultimate freedom isn’t a given.)