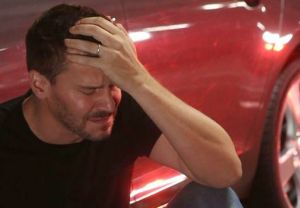 The shrink is wrapped!

In an outta nowhere twist, Dr. Lance Sweets (played by seven-year Bones vet John Francis Daley) was killed in Thursday’s Season 10 opener. The character — who was on the verge of having a baby with longtime love Daisy — got a little too involved in Booth’s FBI conspiracy quagmire, and he paid for it with his life.

In the following Q&A, exec producer Stephen Nathan reveals the off screen circumstances that led to Sweets’ tragic passing, previews next week’s unorthodox funeral, and shares why he’s bracing for the inevitable fan backlash.

TVLINE | When did you decide Sweets had to die?
It was a complicated and very difficult decision for us. John’s career as a writer and director has been taking off over the past few years, and… [this fall he’s helming] a remake of National Lampoons’ Vacation, which coincided with the start of the season. We didn’t know what to do. And then we realized that this fit in very well with the conspiracy arc [that landed Booth in jail]. It gives us something very rich and very emotional to play within the first half of the season. Everybody’s affected very deeply by this. And it also seemed to be a surprising way to start the season. Usually when characters meet their ends on a series it’s at the end of the season.

TVLINE | What was it like saying goodbye to John?
It was very sad. There were a lot of tears shed on the set. We adore John. He’s an important and valued member of the family. It was really painful to lose him. Hopefully that pain will translate into something good for the show moving forward.

TVLINE | How soon after you decided to kill off Sweets did you concoct the Sweets-Daisy reunion/baby plot?
Well, Carla [Gallo] is pregnant, so life wrote that section of the script. We thought, “Oh, this is fantastic. Daisy and Sweets get together during the hiatus, get pregnant and now he dies.” The impending birth of her baby leaves us with another great story arc to play with.

TVLINE | Let’s imagine an alternate universe where John doesn’t have a movie to shoot and Sweets doesn’t die — would you still have made Daisy pregnant with his child?
We probably would have. It seemed right. They were our only on-again/off-again relationship [left]. They just always seemed right together. They were such a great couple. Laura Spencer was terrific in that brief fling with Sweets, but there was something so real and correct about Daisy and Sweets.

TVLINE | Does this mean we will see more of Daisy this season?
We are seeing a bit more of her. She’s in the first two episodes. And I’m in the process of getting the script out for the episode where she has the baby. TVLINE | Was it important to you to give Sweets a nice final moment with both Booth and Brennan in this episode?
Yes. We had to pay off that relationship. Right up to the end, Sweets was helping the people he loved. His last act was to reassure Booth that everything he went through and was going through now would resolve itself. It was a final ultimate act of love and kindness. And it continues in next week’s episode when we deal with finding out who killed him and also give Sweets a nice farewell — well, our version of a funeral.

TVLINE | What does your version of a funeral look like?
It’s not traditional. It’s a service [the gang] has amongst themselves in a location that was very important to Sweets and Daisy. It’s a spectacular, beautiful location.

TVLINE | Will the conspiracy storyline get wrapped up next week?
Yes. What won’t be resolved is how all of this will affect the characters. That will continue on and off for a while. Booth has a pretty big hurdle to get over in the third episode, working with a new agent.

TVLINE | Aubrey?
Yes. John Boyd is doing a spectacular job in the role. It’s such a difficult position to be in for an actor and for a character. And he’s really finding his place and becoming a part of this family very organically and very quickly. I’m sure Bones fans will be flipping out, saying, “Who is this guy?! This is terrible!” Every time someone new shows up we get yelled at. The fans oftentimes seem to think it takes something away from the show. But John is adding so much. And Aubrey and Booth are great together. He’s not replacing anyone, he’s merely a new presence. And a very welcome presence.