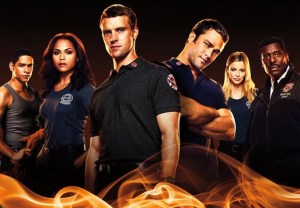 Warning: The following contains MAJOR spoilers from Tuesday’s season premiere of Chicago Fire. If you have yet to watch, head to a different TVLine story. Everyone else, read on…

Chicago Fire fans, have you wiped away your tears yet over Tuesday’s heartbreaking demise?

If not, executive producer Matt Olmstead tries to provide some solace below, with a bit of tough love thrown in — “You mourn it and move on,” he says — as he explains why Shay (played by Lauren German) had to die.

But don’t get too down — there’s some hope for a possible reappearance!

The EP also responds to fan reaction over the shocking twist and reveals that someone else was under consideration for a visit from the Grim Reaper.

TVLINE | I was surprised because I didn’t think the death would be someone as central of a character as Shay.
That was the intention. Going into it, we knew if we were going to do it, it had to be someone who was going to give us a big impact, as opposed to going for a lesser-known character, which would equate to a pulled punch. So, as opposed to approaching it with timidity, we thought we’d go for it.

TVLINE | Not to put a target on anybody else’s back, but you have a very big cast. Did you ever consider killing off a different character?
We did. In the writers’ room, we have [photos of] all the actors in character lined up just as a visual reference. We went down, one by one… It’s like a roster of a sports team when you’re having to make a cut. You’re having to weigh the pros and cons of each one. Some we moved off in two seconds, said that wasn’t going to happen. Others we debated, but we gave everybody a day in court. We came back to Shay because it affected the most people.

TVLINE | How far in advance did you tell Lauren the news? And how did she react?
There was some discussion that this might be happening, and she was very professional about it. She joked that she wasn’t going to miss the Chicago winters. She’s a California girl. So it was nice to know she was able to joke about it a little bit. My experience, having done this a couple times, is you’re expecting the worst and then you’re relieved [by] the professionalism and the graciousness of the actor. They almost know that you’re feeling worse than they are. It sucks, but it’s a job and a craft. This is what happens sometimes. You mourn it and move on. TVLINE | She still got to work on the season premiere in those flashbacks. Was that a welcome treat for Lauren? Or was it sad having to film those scenes, knowing she was leaving the show?
It’s the definition of bittersweet when you get to come back and see everybody, your extended family, but then you realize are you not going to see the people you work with, at least for a while. The character’s dead, obviously, so there’s no coming back. You’re also filming some emotional scenes… It was an emotional set in a lot of different ways.

TVLINE | Shay’s dead, but might we see her in more flashbacks?
There’s no flashbacks. When Derek [Haas] and Michael [Brandt] created the show, keep in mind, the show came on the year after Rescue Me ended. They were as cognizant as I was coming in as the showrunner that we didn’t want to draw too many comparisons to that show. One of the hallmarks of that show was the flashbacks and talking to ghosts and people who died before. So we weren’t going to go that route. At the end of the episode, Severide has a DVD of some of their memories, and for our purposes, there’s plenty of DVDs they recorded [of] their friendship and their life as roommates. Who knows down the line when he might pop one in to remember her when he needs to?

TVLINE | Some fans are miffed because Shay was one of the few female characters on the show and she was also a lesbian. Was that something you took into consideration when making the decision?
No, there was no agenda either way. All the characters were assessed on equal footing, so there wasn’t any kind of, “Let’s not do this for this reason, not do that for that reason.” As storytellers, you have to be unsentimental sometimes. Having done it before, when characters have been killed, absolutely, initially, there’s a very strong reaction, especially from the faction that was really into that character. My policy is really not to go right away and read the comments moments after. You’ve got to let it set a little bit and trust that strong storytelling is going to be strong storytelling.

By way of example, the first gig I ever had was on NYPD Blue a long time ago. There was an arc of the death of Jimmy Smits’ [character Bobby Simone]. It was unbelievable arc in terms of a death of a character, written by David Milch. At the outset, if you would have polled all the viewers, nobody wanted to kill Bobby Simone. He was a beloved character. But what it gave them emotionally and in terms of storytelling and then thereafter was worth it. Sometimes, you have to do that to bring more storylines into a show, and that’s what we decided to do.

TVLINE | From a writer/producer standpoint, what are you going to miss about Shay?
What I’m going to miss about Shay is what I’m going to miss about Lauren German, which is an extremely talented actress who can play both heavy dramatic scenes, but had a light touch and was funny and just likable. Having gone through a lot of casting sessions, a lot of shows, for whatever reason, only a few people really have it in terms of that kind of magical combination. She definitely has it. What’s great about her is you could write anything to her, knowing she would be able to hit it out of the park, whether it was heavy or that rascal-y aspect of her character. She was really a can-do-it-all actress.

Stay tuned to TVLine for Chicago Fire scoop on what’s ahead for Dawson, Severide, Casey and the rest of the team.