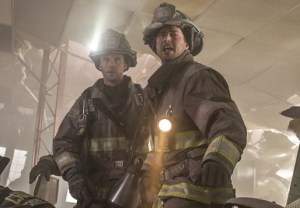 After a summer of worrying about which member of Chicago Fire‘s finest wouldn’t make it out of that explosion alive, Tuesday’s Season 3 premiere finally identified the shocking victim.

And the fallen was… resident paramedic Shay!

That was a bold choice on the show’s part. I fully expected a smaller, supporting character to bite the dust. But by killing off someone as pivotal as Shay, Chi Fire enters Season 3 with a bang, not to mention increased stakes for those she left behind.

The action picks up six weeks later, with Severide MIA from work and Dawson closed off and distant (she still hasn’t moved on to her new firehouse assignment). When she shows up late at work (because of a mysterious appointment), she’s stand-offish with Mills and not all that happy to meet her new medic partner. Things with Casey are stable, but they’re not without their issues. She’s not opening up to him — she’s talking to Antonio instead. She requests that Casey ask her to marry him again so that the memory of his proposal is not tied to the day Shay died. Casey, however, prefers to associate the memory with Shay telling Dawson how good they’d be together.

“The answer’s yes. The answer’s always yes,” Dawson tells her beau, who promises, “I’m going to do it right.”

And that appointment? It was a counseling session in which Dawson breaks down and reveals that she and Shay traded places in the field. The beam should’ve fallen on her.

As for Severide, Casey finds him in the forest chopping wood in a shirtless tank. (How very Jeremy Gilbert of you, Severide.) The rescuer isn’t planning to come back to work, calling the firehouse cursed and full of misery. However, Casey’s speech about all the lives they save resonates with his colleague and Severide returns home to go through his roommate’s things. Casey then invites him to stay with him and Dawson. Casey and Severide living together… Let that sink in for a moment.

All of the emotional drama is punctuated by brief flashbacks of Shay — her first day on the job, her and Severide making a friend contract and, of course, that fateful day that took her life.

* Mouch tries to distract Boden from his grief by inviting him and his new wife on double dates with him and Chicago P.D.‘s Trudy, who’s a hoot and a half.

* The rivalry between Firehouse 51 and Welch’s team is — pardon the pun — heating up. Things are so not going to be good for Dawson if she ever makes it over there.

* Newhouse finds out that Mill’s paternal grandfather is living outside of Chicago, leading Mills to track down one of his young relatives. A cousin perhaps?

UPDATE: Read why the producers decided to kill off Shay.

Chicago Fire fans, were you shocked to see Shay go? Did any particular moment bring tears to your eyes? Hit the comments with your thoughts and don’t forget to grade the episode via the poll below.