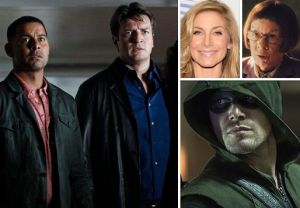 Will a James Bond (or two) ride to Castle‘s rescue? Will New Girl revisit an old romance? Who on Once Upon a Time is having a ball? What new tricks does Arrow have up his sleeve? Read on for answers to those questions plus teases from other shows.

Have any scoop on what will be happening with Ryan and Esposito in the beginning of Castle Season 7? –Dani
Well, if you want to talk about the very beginning, know that RySpo arrive at the car crash scene just moments after Beckett, and thus are still wearing their finest. “We’re not about to let her go by herself,” says Jon Huertas, ” so there we are, in our tuxes — like a Latino James Bond with his Caucasian James Bond sidekick.” And it just may take double the 007s to temper their explosive colleague. “It’s hard to control a person when they’re going through that sort of emotive state, so we let Beckett have her time,” says Huertas. “First and foremost, though, you want to make sure Castle either is or is not in the car — and we find out pretty quickly, as you can tell in the promo.”

You would make my week if you gave us some good Castle scoop! Pretty please with a Badass Beckett on top? –Ginger
Episode 7 will apparently saddle up Kate, Rick et al for a trip to the wild, wild west – or at least a modern-day dude ranch facsimile thereof. Thus, guest casting is underway for a sheriff and his wife, a rugged ranch hand, a “muscular, sexy gay cowboy” and other rootin’-tootin’ folk.

Is there any chance that New Girl‘s Nick and Jess will get back together? –Abi
We chatted up Jake Johnson just the other day, and his feeling is that the two shan’t reunite anytime soon, and possibly not even this season. “I think [showrunner] Liz Meriwether wants more fun between them. I think she doesn’t want it to feel heavy anymore, [with] them getting together and fighting,” he shared. “I think she wants to bring back the kind of fun of Season 1.” So, as Season 4unfurls, Nick’s new fixation will be… the apartment’s new land-line telephone? “He gets really excited about it,” previews the actor. “I start taking messages for Schmidt and Winston, kind of like a secretary.”

Please email me any and all info on Arrow, PLEASE. –Caroline
Sorry, my email is down. So hopefully you’re reading this, as I share that with a new season comes “new toys” for Oliver to play with. “In the season premiere, you’ll see a new kind of arrow,” showrunner Marc Guggenheim shares. “And in Episode 5, there’s another new kind of arrow we’ve never seen before. Season 3 is like a movie sequel, where he’s got new gadgets to play with!”

Does Gillian Anderson being a series regular on Hannibal have any impact for her filming The Fall? –TorontoGirl
I asked around and confirmed that the show’s different production schedules mean that Anderson’s presence on The Fall (which Stateside has moved to Netflix) will not be affected.

Do you know something about the second part of the season of Major Crimes? –Ilona
Do I! On the heels of meeting Ricky Raydor, it looks like Sharon’s daughter is due for a Christmastime visit. Episode 15 will introduce us to Emily, a “focused and driven ballerina,” age 29-33, who while home for the holidays must juggle the different temperaments of her family. (Sounds like they’ll keep the ballerina on her… toes.)

When will the third season of Beauty and the Beast start? –Chiara
Not until “midseason,” which could mean anywhere from January to spring to (to hear some tell it) maybe even summer 2015. But at least you have this to look forward to: In Season 3’s fourth episode, Cat and Vincent will meet with a marriage counselor, as they endeavor to balance their different careers with their relationship.

Any news about Gotham will surely cause me to hyperventilate. Any spoilers at all? –Lindsay
Since you strike me as someone who has already seen the pilot, I can share this: Despite how the first episode ends, Oswald Cobblepot aka The Penguin will resurface in Gotham “pretty quickly,” Ben McKenzie tells us. “[Det. Jim Gordon] is going to live to regret that [decision], and very quickly.” McKenzie even goes so far as to say, “What’s lovely about what [showrunner] Bruno [Heller] has created here [in Jim Gordon] is a good guy doing the right thing, and by doing that, he’s creating one of the worst villains that’s ever existed.”

Just two more weeks until Once Upon a Time! Anything to tide us over? –Jo
Did you see how cocreator Adam Horowitz tweeted the title for Episode 7? Well, take that and add in the fact that for that episode they’re guest-casting the “strong, intelligent and beautiful” middle sister of three, a blue-eyed blonde in her late 20s/early 30s who “always puts her sisters first.” Oh, and the three of ’em are off to a fancy ball….

Do you have any Amy-related Brooklyn Nine-Nine spoilers? I haven’t heard anything about her character. – Brynley
Melissa Fumero tells us that as Jake returns from his undercover FBI gig, “There’s definitely the elephant in the room that needs to be addressed” – meaning, his season-ending profession of feels for Amy. “But I think fans will be surprised by how it all goes down, how Jake handles it.” His approach may be influenced by the fact that Amy is still with Teddy. “We definitely will hear his name a bunch throughout the first episodes, and I think we will see [Kyle Bornheimer] again,” the actress ventures. “Teddy and Amy are still really going strong.”

I read that American Horror Story: Asylum‘s Pepper (played by Naomi Grossman) will be appearing on the Freak Show season. I’m curious, won’t that mess with the show’s Emmy chances as a “miniseries”? –Craig
I can see how one might make that leap, seeing as AHS qualifies for the category by featuring a non-continuous storyline and new characters each cycle. But as I have been reminded, a precedent exists via the likes of Helen Mirren’s Prime Suspect sleuth and Luther’s titular DCI, both of whom migrated from miniseries to miniseries whilst earning Emmy nods.

Any Season 6 scoop on NCIS: LA’s Nell?—Paul
Anyone who enjoyed the Nell/Hetty moment in the season finale “is in for some surprises in the first and second episode, and the third, too,” showrunner Shane Brennan told me. “Nell comes to Hetty’s rescue in a very interesting way.”

Any Hart of Dixie scoop? —Julianna
Is BlueBell big enough for two Zoe Harts? The CW charmer is looking for a twentysomething actress to play “Zoe 2.0,” a very attractive, fashionable, quick-witted, New York attorney struggling to make sense of life in the quaint Alabama burg. The character’s actual name isn’t actually Zoe 2.0. That would be weird and confusing. It’s Olivia Green.