Now is the time to start administering extra TLC to your DVR, because we’re about to drop on you nearly 100 season and series premiere dates for the fall.

Yes, it’s time for TVLine’s preternaturally handy calendar for the fall TV season, which quietly kicks off with Sons of Anarchy‘s farewell cycle and the three-part launch of Fox’s Utopia, gets absolutely ba-na-nas the week of Sept. 21 (with 41 premieres!) and on Sunday the 28th alone uncorks another nine shows.

RELATED Get TVLine’s First Impression of Gotham, The Flash, How to Get Away with Murder, Jane the Virgin and Other New Shows

Here is our round-up of September and October’s big premieres (and a smattering of significant finales), plus a cursory look at what November has in store. (The tinted box also reminds of midseason shows — a good way to save yourself from “Heavens to Betsy, where is Parks and Recreation?!” sorts of anxiety.)

New series are in BOLD. Click thumbnail, save the dates! (UPDATED 11/7) 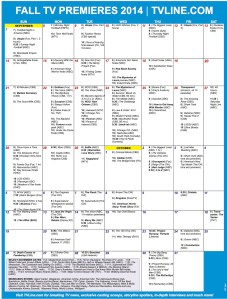 Preemptive P.S. My calendar-making skills have never been infallible, so if you spot something that is (theoretically) missing, drop a nice note in Comments and I will (possibly) include it in an update.