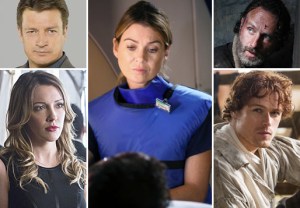 Question: I’m a longtime reader and lover of your weekly AA column and I couldn’t help but notice there wasn’t one last week. —Kaia
Ausiello: I was kinda hoping that would slip by unnoticed, but apparently nothing gets by you, Kaia! On very rare occasions, I will take a week off from AA to, you know, transition my award-winning Smurf dioramas from spring/summer to fall/winter.

Question: Any more info on the new mythology on Castle and how it will shape or affect Season 7 overall? —Rachael
Ausiello: As you can imagine, Monday’s season opener sets up a very provocative, perplexing puzzle to be solved — and only a random piece or two are nudged into place by the time the hour ends, leaving Beckett decidedly uneasy. Suffice it to say, any obvious theories you’ve seen batted around out there over the summer (very likely) missed the mark. Color us definitely intrigued by the who, why and how of Rick’s vanishing act.

Question: Do we know yet who Sally Pressman is playing on Once Upon a Time? She has to be Elsa and Anna’s mom, right? —Deirdre
Ausiello: Maybe. Maybe not. The Once creators were mum on Pressman’s role at the L.A. premiere party, largely because she’s part of “a storyline that has never been introduced,” Eddy Kitsis explained. Added Adam Horowitz: “Out of context, we could tell you her [character’s] name, but it might confuse you. You’d be like, ‘So…?’”

Question: On Once Upon a Time, will Queen Elsa get a chance to bond much with another magical, emotionally closed off, formerly lonely woman who just got her family back (AKA Emma Swan)? —Robert
Ausiello: Elsa will actually play a very important role in Emma’s life, especially with regard to magic. Explains Jennifer Morrison: “Elsa’s definitely helpful in terms of her starting to figure out ways to focus her power, control her power and try to use it as effectively as possible.”

Question: How will Olivia & Co. deal with Harrison’s death on Scandal? —Sarah
Ausiello: The original Gladiator’s untimely demise will have a profound impact on Abby. “It affects her in way I never saw coming,” teases her portrayer, Darby Stanchfield. “It affects her deeply, profoundly. You will see in the very first scene how Abby is different.”

Question: Anything on Scandal? —Anet
Ausiello: It may be a while before we find out how Huck’s family reunion went; he was last seen ringing the doorbell at his ex’s house, after which she opened the door. Per Guillermo Diaz, “We’re starting to shoot Episode 6 and we haven’t really touched on it that much. But our show is all about flashbacks, so I’m sure at some point Shonda [Rhimes] is going to flash back [to that moment] and we’re going to find out what [happened].”

Question: I’m not going to be able to handle the break after Outlander‘s finale. Give me something to tide me over until next year? –Molly
Ausiello: First, pace yourself. You’ve got one episode to savor before the midseason hiatus. Second, if you haven’t read the books, this next bit is a spoiler. Proceed accordingly. Third, how about a little intel on Season 2? The Starz series is casting Brianna Randall, whom fans of Diana Gabaldon’s novels know is Jamie and Claire’s 20-year-old daughter. Bree – who was raised in Boston and who calls Frank Randall her dad — is smart, strong-minded, practical, funny and stunningly beautiful (like her folks). Start your dream casting in the comments!

Question: Any spoilers on Outlander would be greatly appreciated. This is definitely my favorite show of the summer!! —Elizabeth
Ausiello: We checked in with Sam Heughan just as he was wrapping the second half of Season 1. As book readers know [SPOILER ALERT!], Jamie suffers some spirit- and body-crushing injuries toward the end of the novel; as such, Heughan said viewers of the Starz adaptation should brace themselves. “It just gets stronger and stronger in the last few episodes — not just Wentworth Prison, which is very intense and I’m very pleased with how it’s come out. I think it’s going to be some insane viewing.”

Question: Got anything on Sleepy Hollow? —Liz
Ausiello: Lyndie Greenwood tells TVLine that Jenny won’t be enamored of Sheriff Leena Reyes (played by House of Cards‘ Sakina Jaffrey), who debuts next week. A former Sleepy Hollow lawwoman, Reyes was around when Abbie and Jenny’s crazy mom was alive, but “Jenny doesn’t remember her, so when she finds out Reyes was around [before], she feels extremely betrayed,” the actress says. “She gets her guard up pretty quickly. She’s not a fan.” BONUS SCOOP: I hear that when Matt Barr’s Nick Hawley arrives on the scene, he’ll have a past connection to one Mills sister… but be interested in the other.

Question: Do you have anything on The Mindy Project? I’m super excited about Rhea Perlman as Danny’s mom! —Nath
Ausiello: Then you’ll be super-duper excited about this: Perlman tells TVLine that she’s signed on for at least five episodes, with the possibility of more.

Question: I just discovered Beauty and the Beast and I’m dying to know what will happen in the new season! —Lauriane
Ausiello: Cat will still be with the NYPD when the show returns at midseason, but Tess will no longer be her partner — at least not as of Episode 5. That’s when the show will introduce Detective Harris, a relatively green cop in his late 20s who is quite chuffed to work alongside the infamous Cat.

Question: Jo and Alex are so happy right now, but that never seems to last long on Grey’s Anatomy! Anything coming up for them? —Sarah
Ausiello: As we all surmised, Meredith’s tendency to lean on the last fellow “original,” Alex, in the wake of her “person” Cristina’s exit, will raise Jo’s pretty little eyebrows. As Camilla Luddington explained to Matt Mitovich, “Jo’s never actually witnessed the depth of that relationship before, how with that gang there really were no boundaries, so she sees that and is taken aback. She’s jealous and she doesn’t know what to do.” In fact as the season unfolds, on a scale of 1 to 10, Luddington puts the state of the JoLex union at — eep! — just “a 5 or a 6.”

Question: Will Meredith know Maggie is her sister by the end of the Grey’s Anatomy season premiere? —Nikki
Ausiello: Sounds like the answer to that is nope. “The revelation of who Maggie is to Meredith won’t happen until she feels comfortable in the hospital,” reveals Kelly McCreary (AKA Maggie). “She came for the job. The family thing is sort of a side bar. She’s got her work cut out for her at [Grey Sloan]. So it’ll take as long as it takes for her to settle in.”

Question: Any spoilers for The Walking Dead? —Lincoln
Ausiello: You know how last season the major-character-body-count was relatively low? That will not be the case in Season 5.

Question: I’m having a terrible day, but some Bones scoop can make it all better. Any more deets on the 200th episode (last week’s tease sounded awesome)? —Amelia
Ausiello: Yes! David Boreanaz is confirmed to direct the milestone outing, which is slated to air in early December. Also, Ep 200 will be overflowing with Bones alums. Pretty much everyone you’d want/expect to be back for the milestone outing will be present and accounted for. Except for Parker; he’ll most likely be MIA.

Question: I can’t wait for Chicago PD to return. I am dying for some Halstead/Lindsey spoilers. Anything romantic happening there? —Katrina
Ausiello: As long as Voight is around, probably not. “[He] warned them — Halstead in particular — that he doesn’t like in-house romances,” executive producer Matt Olmstead explains. “Then they saw the real-world ramification of that when Burgess and Atwater were both vying for Intelligence, and he dinged Burgess because he knew that there was that whole thing going on with Ruzek…” In other words, Lindsay and Halstead will have to avoid any hanky panky if  “they want to be in this unit [and] ascend.” Having said that, Olmstead notes that “given the opportunity, I think that they would fall into a relationship fairly quickly.”

Question: Any chance you have any Looking spoilers up your sleeve? I think TVLine is great even if you don’t have any spoilers for me. —Donna
Ausiello: Well, I think you’re great, Donna. Even if you’re always asking for spoilers on dumb shows I don’t give a crap about. Lucky for you, I love Looking — and I have scoop about it. Around the midway point of the show’s 10-episode second season, we’ll meet Doris’ (Lauren Weedman) surprisingly conservative and proper Aunt Sarah. (Word is Auntie S shares her niece’s penchant for being slightly scatterbrained). Question: Do you have anything on Criminal Minds? —Brandon
Ausiello: The long-running CBS procedural is hiring a woman to do a man’s job (i.e. kill lots of innocent people). In this season’s ninth episode, the show will take the unusual step of introducing a female unsub — and she sounds like Patrick Bateman’s twin sister. The character is described as a successful, extremely attractive thirtysomething career woman who is impulsive, emotional and prone to sudden rages. BONUS SCOOP: In the same episode, we will meet Rossi’s second wife in a circa 1994 flashback. Not sure what that’s about.

Question: Any details on Connie Nielsen’s recurring gig on The Good Wife?
Ausiello: Don’t look for Nielsen’s “smart, beautiful attorney with far-reaching Cook County connections” — a role first reported by TVLine last month — to be Alicia’s new martini buddy. “We’re actually exploring this line between friend and rival,” says executive producer Robert King. “If it were another circumstance, you might say, ‘This would be my best friend in the world, and I would love talking to her,’ but in fact, because of the situation, you’re finding yourself maybe not hating her, but hating the situation.” Could Nielsen’s character somehow stand in opposition to Alicia’s possible run for State’s Attorney? “We’re leaving it vague,” chimes in fellow EP Michelle King. Sounds like a definite maybe (or maybe not) to us! BONUS SCOOP: Robert King adds that the show’s writing staff has read up on its Illinois election rules — and learned that “Saint Alicia” won’t need to quit Florrick-Agos if/when she throws her hat in the ring for her husband’s old job. In other words, Season 6’s “pivot to politics” doesn’t mean Alicia’s case load will be “left in the rear-view mirror,” he promises.

Question: Will Laurel and Felicity become friends in the new season of Arrow? —Meg
Ausiello: Not only will Felicity and now-in-the-know Laurel be friendly this season, but our favorite geek girl will also get on great with fleeting beau Barry Allen’s No. 1 Central City gal, during the Arrow/The Flash crossover (in Episodes 8). “[Iris West] does have an opinion on Felicity, and it’s all good. She’s a fan of Felicity,” The Flash’s Candice Patton tells us. “I think viewers will be very excited to see Barry stuck between these two women. It’s so good.”