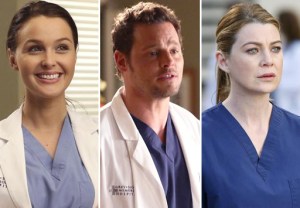 File this one under “Grey’s Anatomy‘s Triangles We Never Thought We’d See.”

Series creator Shonda Rhimes tells TVLine that, in Season 11, Meredith, of all people — yes, Meredith, that Meredith — is going to throw a monkey wrench into Alex and Jo’s still-nascent romance.

And, no doubt, Jo will ask the same question we have: Why is this happening? Why, when the drama returns on Sept. 25, will Alex and Mer be joined at the hip? The answer: Cristina.

“Alex feels responsible for her,” Rhimes explains. “He feels like Cristina didn’t just leave him a seat on the board and the shares, she left him Meredith as well.”

And, since Mer will not only be dealing with Cristina’s absence and trouble with Derek but also (eventually) the revelation that she has another half sister, she is going to need a (strictly platonic) shoulder to lean on and an ear to bend.

“The two people she talked to before — her husband and her best friend — are now not available to her,” notes Rhimes. “So she’s looking for someone to talk to. And Alex finds himself in the uncomfortable position of being the recipient of a lot of the stuff that Cristina would have been left listening to — sometimes in very funny ways.

“They’re the last men standing of those original interns,” Rhimes continues. “I wouldn’t say they’re becoming besties. [It’s more that] they’ve always had a very close relationship that didn’t ever need a lot of work because they always had a million other people there. Now, it’s sort of the two of them, and they do become closer.”