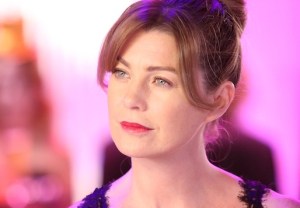 Grey’s Anatomy will turn its clocks ahead when Season 11 launches this September, but how much time will have passed since the events of May’s finale?

The limited time jump all but confirms that Meredith will still be reeling from the loss of BFF Cristina, and, potentially, D.C.-bound husband Derek. It also perfectly tees up the theme of the season.

“Right now, if you were in the writers’ room, you would probably tell me that the theme is ‘Meredith,'” Rhimes shares. “Because all I keep saying is, ‘The show is just about Meredith Grey!’

“It’s really a Meredith-centric season,” the EP continues. “She’s lost her ‘person,’ her [half-]sister has shown up, her husband is chafing to go someplace else…”

Speaking of Mer’s new secret sibling, Rhimes says the reveal that cardiothoracic surgery boss Maggie is the child of Richard and Ellis “will be influenced by what Meredith went through with Lexie,” her other (ill-fated) half-sis.

Rhimes reveals that this familial grenade is one she’s been wanting to pull the pin on “forever.” And then, about a month before the Season 10 finale, Rhimes says she told the writers, “‘Annnnd... we’re there,’ and they all [cheered]. So it’s pretty exciting.”