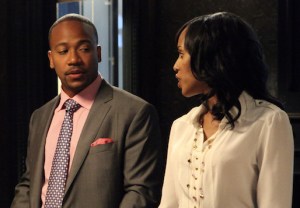 Grey’s Anatomy‘s pulse remains strong, and as such its creator has no plans to call time of death anytime soon.

Appearing at the Television Critics Assoc. summer press tour on Monday morning — where she was touting ABC’s latest Shondaland drama, How to Get Away With Murder — Shonda Rhimes noted that Grey’s “is still the No. 1 drama on television, so no,” she has no plans to start eyeballing an end date. “Right now, as long as I am still interested in what happens next, I am not thinking about that.”

Grey’s this season will lead off ABC’s Thursday slate, leading into Scandal and the aforementioned Murder.

Speaking of Rhimes’ other returning hit drama: TVLine asked if Scandal would be adding a series regular for Season 4 — possibly a new “Gladiator”? — in the wake of original castmember Columbus Short’s split with the show, where he played Harrison.

“Not yet…. I have no plans to do so, yet,” she said of filling that vacancy with fresh blood. And specifically on the topic of hiring a new OPA associate, Rhimes reminded, “When we left [off in the Season 3 finale], were there any gladiators?”

Want scoop on Grey’s or Scandal, or for any other show? Email insideline@tvline.com and your question may be answered via Matt’s Inside Line.