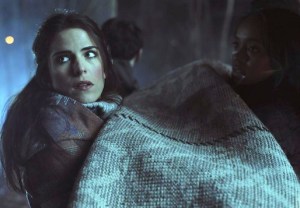 The cast and executive producers of ABC’s How to Get Away with Murder were put on trial Tuesday at the Television Critics Association’s summer press tour. First order of business: the murder mystery’s incredibly long title.

Creator/executive producer Pete Novalk said the title was always his “first instinct,” because that’s how Viola Davis’ professor character refers to her class. “It’s a little controversial on purpose,” he admitted.

“We don’t consider a hashtag when we’re writing,” Rhimes stated. “The audience will decide what it wants to call the show. … Twitter makes it own decisions. Twitter makes stuff up, and that’s far more interesting.”

RELATED Fall TV First Impression: ABC’s How to Get Away With Murder Another major question looming over the ABC drama series is whether or not it can exist beyond the initial mystery introduced in Season 1.

“I don’t think the show is going to go where you expect it to go,” Novalk said. “We’ve always had a plan to launch it into Season 2 with a really cool storyline. … I wouldn’t want to do it unless it could go many seasons.”

Part of that plan, Novalk said, is in keeping with the show’s theme: “No one is who they seem to be.” (Novalk specifically pointed to Liza Weil’s character, Bonnie, as one who will evolve over time.)

The other part will be how the momentum is maintained throughout the season.

“I think we’re going to catch up to the murder a little before the end of the season,” Novalk revealed. “I want to keep the plot moving.”

As for why star Viola Davis took on this project? That’s no mystery.

“I wanted to be the show,” Davis admitted. “I wanted to have a character that took me out of my comfort zone.”