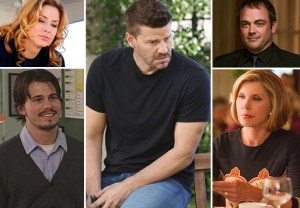 Question: It’s been too long since you’ve had anything on Bones. With the show about to return, what can you tease about it? —Cassidy
Ausiello: Booth and Brennan are going incognito again, and the setting for their covert mission sounds LOL hilarious. “They are going to be undercover at a crossword puzzle tournament,” reveals exec producer Stephen Nathan, who hints that they will be taking on new aliases this time around. “That remains to be seen, but I’m smelling new [personas].”

Question: You’ve been neglecting Bones ever since San Diego Comic-Con — which was like a zillion years ago. I need you to go back and pester Stephen Nathan to get an answer to how long Brennan and Booth’s relationship will be affected by Booth’s PTSD. —Cindy
Ausiello: Geez, you guys are really on my case about this little Bones scoop respite. Even lovers need a holiday, right? To answer your question, Nathan says the PTSD arc will “not be overwhelming,” but “it’s something he has to deal with. It’s not as if he is in a rubber room, you know? It’s a trauma that has shaken his trust in the people and the institutions that he took for granted. So it’s just a matter of regaining that trust, and that’s what he’s dealing with.” And here’s a BONUS SCOOP to keep you placated: The show’s 200th episode will explore “what Booth and Brennan might have been like in another world,” teases Nathan of the milestone outing, which he insists will not be a dream, nor be set in an alternate reality. “It’s going to be like going for a ride at an amusement park.”

Question: In what episode of NCIS Season 12 will Jim Beaver be guest-starring? —JP
Ausiello: Though we don’t have the episode number, we do have a title — “The San Dominick.” And Matt Mitovich has learned that it’s the same episode that brings back fan fave Diane Neal as CGIS Agent Borin. The plot: During a joint NCIS/Coast Guard training exercise, Gibbs and Borin find a body floating in the water. Once it’s determined that the deceased was a crew member aboard a ship run by a Captain Tom O’Rourke (Supernatural alum Beaver’s role), the two decide to pay a visit to the vessel some 60 nautical miles away, to further investigate the “man overboard” situation.

Question: Any Big Bang scoop — particularly Raj-Emily related? —Jen
Ausiello: When the sitcom returns, they will still be boyfriend and girlfriend. And Raj will still be on cloud nine. “He’s very much in the giddy, ‘OK, I have a girlfriend and she’s really cute and she likes me phase. And I get to see her naked,'” previews showrunner Steve Molaro. “They are still in the honeymoon of that. And as we got through the season, we will explore more of her personality and what she’s really like.”

Question: Any info on how The Good Wife will reintroduce Matthew Goode’s character on the upcoming season? —Lucas
Ausiello: Ohhh, Finn Polmar looms large in the Sept. 21 season opener — and in a way that could very well decide if he and Alicia will ever share the kind of closeness she had with Will. Seriously, you’re about to see just how pitbull-like this guy can be.

Question: Any scoop on what is to come for Alicia and Peter’s marriage on The Good Wife? –Kiki
Ausiello: Eli’s determination to have Alicia run for state’s attorney — and which side of that debate Peter is ultimately on — stands to play at least a small part in the married couple’s future. (A certain someone who doesn’t wear panties also threatens to be a fly in the ointment.)

Question: Anything Diane-related for The Good Wife? —Amy
Ausiello: With her move to Florrick-Agos’ decidedly downscale digs, Diane might face a few moments of asking herself “What the hell is this place?” previews creator Robert King – especially now that the show has cast Danny Hock (The Knick) to guest-star as a homeless man who frequently uses the fledgling firm’s bathroom “as a poor man’s shower.” (If you’ll allow a moment of self-congratulation, it should be noted that I broke news of that highly unexpected character in this very column back in July.) Nevertheless, Emmy nominee Christine Baranski’s alter-ego will ultimately find herself excited by the question of whether she can help a firm grow from startup to powerhouse — “and whether she can do it better and possibly with more of her ideals in tact,” King adds.

Question: Could we please have some info about Kensi on NCIS: LA? Pretty please? —Abby
Ausiello: Hmm, how about an exclusive photo from the Season 6 premiere (airing Monday — remember, Monday, Sept. 29 at 10/9c)? What’s going on here, you ask? As show boss Shane Brennan told Matt Mitovich during our Fall Preview Q&A, “Talia (returning guest star Mercedes Masohn) poses some questions that make Kensi stop and think [about her Deeks situation]. She also gives Kensi some, let’s call it, ‘unasked-for advice.’” Question: I’m not sure if Manu Bennett is a series regular for Arrow Season 3? Will we be seeing Slade at all? —Nasir
Ausiello: In the DC Comics universe, one should never say never, but no, Manu/Slade will not play a role in the early part of Season 3, at least.

Question: Do you have any insight as to who the Big Bad of season 3 of Arrow will be? —Michael
Ausiello: As revealed at Comic-Con, the Big Bad is this guy — the iconic DC Comics villain Ra’s al Ghul, just recently cast with Aussie Matt Nable. And though the League of Assassins leader is first seen in Episode 4, it will take a bit before he and Arrow butt heads, swords or what have you. “Before the winter break, which would be Episode 9, you’ll see some big stuff with him and Oliver,” promises EP Greg Berlanti.

Question: Will Dr. Whale continue to be seen at all on Once Upon a Time, now that David Anders is on iZombie? Don’t both shows shoot in the same town? —Gwen
Ausiello: Were it as simple as sending Vancouver Taxi to fetch Anders (or his leading lady Rose McIver aka Tinker Bell, for that matter), but it’s not. “We would love to drag [David] across town, as [iZombie EP] Rob [Thomas] is an old friend of ours,” says Once cocreator Eddy Kitsis. “But he’s not in the first batch [of Season 4 episodes].” (Dr. Whale does get a shout-out in an early episode, however. So there’s that.)

Question: Any intel on Sons of Anarchy‘s final episode? —Kaitlin
Ausiello: The episode will be written and directed by series creator Kurt Sutter, and it does not currently have a title (“I usually don’t get those until I’m through writing Act 1,” he says). The last scene, however, is already taking shape. “I have a sense of what that final sequence will be,” shares SOA‘s fearless leader. “I’m not quite sure how I’m going to get there yet, but it gets a little more clear with every episode.”

Question: I sensed some sparkage between Wendy and Nero in the Sons of Anarchy‘s premiere. Is that going to lead to something? —Ben
Ausiello: As Sutter shared in our Fall Preview Spoiler Spectacular, an “interesting friendship” will develop between the two ex-junkies. Elaborates the EP: “Nero makes the ironic realization that, at the end of the day, the woman who was probably THE most damaged in the pilot is probably the most self-aware human being in Charming.”

Question: I love Sleepy Hollow‘s Katrina – please tell me she’s in the real world longer than just one episode. —Erin
Ausiello: Well, she’s around long enough to engage in some retail therapy, says executive producer Mark Goffman. “I would say she doesn’t cling to her wardrobe the way that Crane does,” he teases, adding that when Mrs. Crane hits the mall, her style is “pretty edgy.” So… no Revolutionary War re-enactor costumes? “She’s a much cooler dresser in a way of mixing and matching the modern era with her own.”

Question: If and when we meet Crane’s mother on Sleepy Hollow, will Victor Garber return as his dad? —Dave
Ausiello: “There’s no doubt that we will learn a lot more about Crane’s mother, potentially in the second half” of the upcoming second season, Goffman tells TVLine, going on to say that Garber – who’s already filmed at least one Season 2 episode – would be very welcome to make another visit. “He’s unbelievable. We loved having him on the show last year and are excited to have him back.”

Question: Anxiously awaiting the return of Parenthood. Got anything new for us? —Andrea
Ausiello: Series creator Jason Katims tells us he’d like to bring back as many P’hood alums as possible for the show’s final 13-episode run, but squeezing them in will prove challenging. “Because we are coming to an ending, the stories are leaning toward the bigger issues in the lives of our characters,” he explains. “There are only 13 episodes, so there’s not a lot of room to say, ‘Oh, let’s bring this person back.’ It really has to fit into the bigger plan.” So far, both Matt Lauria and Sarah Ramos — both of whom are set to return for at least one installment — fit that bill. And so may Jason Ritter’s Mark. “If that happened, it would be later in the season,” he says of a possible Ritter reprisal. “I would love to find a way to have him come back.”

Question: Can you find out if Castiel and Crowley will be in the 200th episode of Supernatural? —Franca
Ausiello: I can, I will and I did. “We can’t give too much away about the 200th episode or the storylines leading up to it,” a spokesperson for the show tells TVLine, “but we can say that while Misha Collins and Mark Sheppard are not in the episode” — not a huge shock considering series-regular status doesn’t guarantee a presence in all episodes produced — “they, and many other favorite characters from the past nine seasons, will be represented in a way that we think fans will love.” Considering how unique the show’s past meta episodes have been, in what crazy way do you think “Castiel” and “Crowley” will make their presence known?