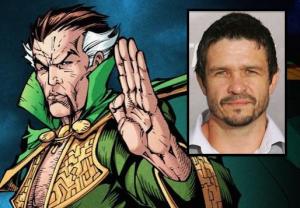 The leader of the League of Assassins and father to Nyssa al Ghul (played on Arrow by Katrina Law), Ra’s (as I call him) is described as “proud and unforgiving, a ruthless strategist, a master of martial arts, and a shaper of history.” He carries the wisdom of the ages, and protects some of its greatest secrets.

Nable — whose credits include the big-screen action flick Riddick and the Aussie crime drama Underbelly — will make his Arrow debut in Season 3, Episode 4, which is titled “The Magician” and also marks the CW hit’s 50th episode to date. A onetime rugby player, when his pro career ended he took up boxing and fought for the “state light-heavyweight title as an amateur” in England.

Liam Neeson, who played Ra’s al Ghul in Christopher Nolan’s Batman films, recently told MTV he’d revisit the role on TV “in a heartbeat, if it came my way.” But short of that, he advised any small-screen successor to “believe in [the character’s] philosophy,” saying: “Ra’s al Ghul absolutely believed what he was doing was ultimately saving civilization.”