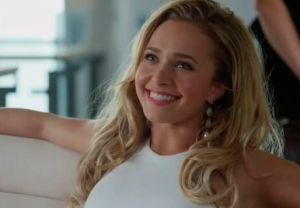 Question: Will there be more fallout from Juliette and Jeff’s hook-up on Nashville? Please tell me it won’t break up her and Avery! — Nat
Ausiello: Downside: I hear Juliette will likely find herself with child (a move that would mirror Hayden Panettiere’s still-unconfirmed real-life pregnancy) when Season 3 picks up, but by whom? You’ll recall, she knocked cowboy boots with both Jeff and Avery near the end of the season. Upside: Both Ms. Barnes and her producer boyfriend will have plenty of songwriting fodder for months to come. Plus, Juliette changing diapers? You know I wanna see that.

Question: Could I please have some scoop on Scandal? —Kyle
Ausiello: The Season 4 premiere, airing Thursday, Sept. 25 (now at 9/8c, remember!), will pick up “about two-and-a-half months later,” Shonda Rhimes tells us — effectively spanning the time from Election Day to Fitz’s second inauguration.

Question: Have you heard any possible spoilers for season 2 of The Blacklist? —Robert
Ausiello: EP John Eisendrath confirms that Peter Stormare will absolutely be back as Berlin, effusing, “He has been and and will continue to be great” in that role. And when we asked about Tom’s unclear fate, he hedged that it “will be confirmed during the season,” one way or the other, “though I don’t exactly know when.” (Something to think about: Eisendrath let slip that for one brief, hot second, the writers imagined Tom would one day be revealed as No. 1 on the Blacklist, yet ultimately decided he wasn’t worthy. Hmm.)

Question: Anything for my favorite shows, Agents of S.H.I.E.L.D. or Once Upon a Time? —Niky
Ausiello: Choosing from Column A, S.H.I.E.L.D. producers are typically mum on details for Season 2, even when it comes to how much time will have passed since Coulson was appointed Director of TFOKAS (The Former Organization Known As S.H.I.E.L.D.). “There is a jump,” EP Jed Whedon allows. “It might be a little skip, it might be just a hop-skip-jump…. But yes, a little time has passed.” As for an overall theme for Season 2, EP Maurissa Tancharoen shares, “There was a word that came up a lot towards the end of the season — evolution — and that is something we will be exploring.”

Question: Any word yet on whether B.J. Britt will be a full-time member of Agents of S.H.I.E.L.D. in Season 2? —Olivia
Ausiello: According to exec producer Jed Whedon, Triplett “will be around a lot” when the ABC series returns on Tuesday, Sept. 23 (now at 9/8c, remember!). Chiming in on how Britt instantly sparked with fans (as well as Miss Simmons), EP Jeph Loeb says, “You always have hope for characters, then when people ‘pop,’ you’re like, ‘Oh, that’s cool’ and you steer toward that.”

Question: Good afternoon! Do you have any scoop on Royal Pains? There might be some Snapple in it for you if you do. —Jessica
Ausiello: Snapple bribes are so 2002. I have long since moved on to cold, hard cash — small bills, preferable. And I’d say the exclusive image below of Hank and Evan skinny dipping from the July 22 episode should command at least… actually, you make the first offer. I don’t want to come off as greedy. Question: Any Chasing Life scoop? Preferably about which guy April will choose? — Kate
Ausiello: I hope you like love triangles, Kate, because this one’s going to be playing out for a long time — and it looks like the balance is shifting in Leo’s favor. “There’s going to be a wedge driven between Dominic and April before she tells him she has cancer, and it has nothing to do with Leo,” star Italia Ricci says. (A little bonus scoop hidden in there: She does eventually tell Dominic about her cancer.)

Question: Can you give me the scoop on Season 6 of Parenthood? —Margaret
Ausiello: With the series’ final 13-episode run set to “challenge” the Braverman clan like never before, even little-seen Haddie will be on hand for the season opener — if not beyond. In addition to appearing in the premiere that kicks off the ominous season-long arc, show boss Jason Katims says, “I’m hoping that [Sarah Ramos] will be able to come back for one more [episode].”

Question: Andy Samberg’s Peralta was headed undercover at the end of Brooklyn Nine-Nine‘s freshman season. Is he still going to be separated from his precinct pals when the show returns? —Bethanny
Ausiello: Let’s allow the show’s recent Emmy nominee for Best Supporting Actor in a Comedy Series to answer that question: “Peralta comes back from his undercover gig with the FBI hoping to pick right up where he left off, but things have changed in the squad,” teases Andre Braugher. “There’s a new police commissioner and something different in the air. It’s the beginning of big changes within the NYPD, and our little precinct is going to be transformed in the coming months.” But just because there are shake-ups at the top of the food chain doesn’t mean Braugher’s Capt. Holt won’t engage in the “usual needling, that pushing back and forth” with Peralta. “We are a family,” Braugher explains. “But there are no fights more terrible than between people who love each other.” Bonus scoop: Asked if we’ll see Holt’s hubby (Marc Evan Jackson) in Season 2, Braugher sounds optimistic, but ultimately noncommittal. “Most of the stuff that happens in the show happens in the squad,” he says. “We don’t go home quite as often as other shows. I think you may see him — but the storylines don’t revolve around Holt’s home life.” Question: Any news on Shameless season 5? —Angela
Ausiello: It looks like Fiona’s dance card will be quite full when the show returns in early 2015. On the heels of news that Tony winner Steve Kazee has joined the cast as a rock musician who, ahem, interacts with Fi, TVLine has learned exclusively that Aussie actor-singer Axle Whitehead has booked an arc as… a rock musician who, ahem, also interacts with Fi. Whitehead’s character, Davis, develops a strong and sudden interest in Emmy Rossum’s lovelorn alter ego. And as the charming lead singer of the band Jezebel, Davis — with his sexy Australian accent, rock star arrogance, and dogged persistence — knows exactly how to make a woman weak at the knees. And that could spell trouble for the newly reformed Fiona.

Question: Any indication on the fate of USA’s Playing House? This show is amazing and I hope USA gives it a second season. —Gemini
Ausiello: “A lot of fans love it, and creatively it’s a great show,” USA Network president Chris McCumber concurs. “We’re assessing right now. It’s our second dip into comedy, and we need to take a look at the numbers. A decision will be coming soon.”

Question: I binged-watched Resurrection solely because of one Matt Craven, and now I am shamelessly hooked.  Can you give me anything on what to expect when it “returns” in the fall? —Kira
Ausiello: What you can expect is a good deal more insight into Omar Epps’ character. “The way we left off, there are a lot of questions that we have laid on Bellamy that we will be dealing with,” series creator Aaron Zelman tells TVLine. “It’s an ensemble show, but we will very much learn more about him, that there will be more of a focus on him.”

Question: Any spoilers for next season’s Greys Anatomy, especially for Calzona? —Barbara
Ausiello: The pair’s decision to pursue a surrogacy is sadly “a Band-Aid” for the troubled twosome, Shonda Rhimes says. “It’s going to be revealed very quickly for them that it is a Band-Aid. How could it not be? I don’t know if anybody could watch that and go, ‘Yeah, that’s the answer for them.’ But I love the idea that it’s going to open up the opportunity for them to finally explore everything that’s wrong and whether or not they should be together at all. Their entire relationship has been a series of Band-Aids.”

Question: Word has it Arrow‘s Oliver and Felicity shared a kiss in the Season 2 finale that hit the cutting room floor. Can you do your usual awesome work and find out why it was cut? —Julie
Ausiello: As EP Greg Berlanti explains it, “We felt like we didn’t need it, for a lot of reasons. But in part, we already were playing with [the viewers’] affections to a certain degree,” by having Oliver “profess” his love to his No. 1 gal, knowing that Slade was listening in.

Question: Anything on Downton Abbey Season 5? —Andrea
Ausiello: Mr. Bates and Anna won’t be dealing with anything “as heavy as last season’s [rape] storyline,” previews the latter’s Emmy-nominated portrayer, Joanne Froggatt. “I don’t think anything can come close to that, really. But, at the same time, the clouds haven’t fully parted. Understandably. There are still some trials and tribulations for Anna and Bates but there is some happiness too.” Question: I was wondering what White Collar‘s final-season storyline will be about. —Michael
Ausiello: Sounds like a Q perfectly tailored to the show’s perfectly tailored leading man Matt Bomer. “It revolves around the greatest crime ring in the world, which is a group that actually exists, called The Pink Panthers,” he explains. “Neal is trying to become a mole in their organization in order to get his freedom from the FBI. Old characters come back and new characters are introduced. Drama ensues.”

Question: I was wondering if you have any scoop on Chicago Fire? —Jennifer
Ausiello: The question of whether or not Dawson will accept Casey’s proposal will be answered in the season premiere, and it’s looking like it’ll be a… “Yes!” But even though “they’re happy and meant to be together… the complication going forward is she wants to be a firefighter,” previews EP Matt Olmstead. Casey will have to ask himself, “‘Can I deal with this? Can I be in a relationship with someone I’m also worried about because I know the dangers of the job?’ That’s another monkey wrench thrown into their somewhat star-crossed relationship.”

Question: I’ll take anything on Season 6 of The Good Wife! —Lauren
Ausiello: TV’s most stunningly chic ensemble will get a decidedly tattered infusion when a character by the name of Gunter arrives in Episode 2 — strutting around Florrick Agos HQ in a state of undress, sporting a dirty t-shirt and (!) regularly bathing himself in the bathroom sink. Yep, the man (who’s somewhere between 34 and 50) is homeless — and seeing how he’s comfortable enough to mutter complaints to management when the hot water is off, he’s also got potential to become a recurring character. Let’s hope somehow, some way, he crosses paths with David Lee, yes?