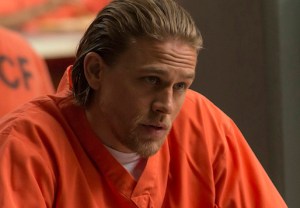 FX’s Sons of Anarchy kicked off its farewell run on Tuesday in gory fashion, as an unglued Jax set out to avenge his wife Tara’s brutal murder. As series creator Kurt Sutter recently told TVLine, “It’s the most proactive we’ve ever seen our hero in the sense of being singular of purpose. It’s all about revenge.” And he wasn’t kidding.

In the closing moments of the 105-minute opener, Jax savagely butchered an innocent (of this crime, at least) man — at the prompting of the actual culprit, Gemma. Speaking of Sons‘ Black Widow: When she wasn’t covering her tracks, she was busy chatting with her late daughter-in-law’s spirit, attempting a reconciliation with ex-lover Nero and trying to convince her accomplice Juice that she’s not bat$#*! crazy.

In the following Q&A, Sutter tackles a smattering of our hot premiere-episode topics, including (but not limited to) the decision to keep Tara’s memorial off screen, Jax and Gemma’s trust issues (or lack thereof), Wayne’s impending revelation, Juice’s “revealing” workout and much more.

TVLINE | Talk to me about the decision not to show Tara’s funeral in that opening montage.
We have done a lot of funerals on the show already — [like] Donna’s funeral. It felt a little too obvious. And I liked the fact that Jax didn’t want to be there when the body was put in the ground. It was simple, quiet and functional. It wasn’t going to be an event that you would normally see on a TV show. We have that moment [during the opening montage] with Unser, and that’s how we acknowledge it.

TVLINE | Gemma insists to Juice at one point that she’s not a psychopath. Do you agree with her self-diagnosis?
I do. I really do. I think Gemma is capable of great violence. She has done a lot of dark things in her life, and some of them we have never seen and she has never revealed. I do think she believed that the events that happened with Tara were [the result of] misinformation. And that she, at the end of the day, felt like she was protecting the club and protecting her son. And that’s what she’s holding on to. In her mind, she was doing it for the right reasons. And then she qualifies everything else, with, “Well, if I tell the truth, all of these bad things are going to happen. So it’s best that I keep this secret.” Obviously, it’s self-serving. We’ve witnessed the damage that’s been created by Gemma’s secrets in the past, and this is no different. And, yet, again, she believes this is the best thing. Jax is the perpetrator of the violence, but she lights the fire. She gives him the information that sets in motion these horrendous events based on a lie.

VIDEO Sons of Anarchy‘s Katey Sagal: ‘It Was Time For [Spoiler] to Die’

TVLINE | Speaking of Gemma’s lies, why did Jax take her on her word when she fingered the Chinese gang member as having killed Tara?
At that point, there’s no reason why he would have any doubt, or any reason to believe that she was responsible [for Tara’s death]. And the fact that she actually identifies a specific guy is ultimately the thing that convinces Jax. And, remember, it was Tara and Eli who were killed — could Gemma have pulled off both of those? And [from Jax’s POV], Gemma didn’t really know anything about the war with the Chinese in order to make up that lie. It was Juice that gave her all that information, that she then fed to Jax. That all made it implausible for it to be manufactured by Gemma. Obviously, as the audience, we know it’s because Gemma had a partner. Therein lies the blood bond between Gemma and Juice.

TVLINE | We saw Gemma “talking” to Tara in the kitchen at one point. Which was weird. Where did the idea for that come from?
It came out in the writing, and I’m sort of going with it. [Laughs] In a lot of episodes [this season], she has this continuing dialogue with Tara. In her mind, it’s her way of exorcising that guilt. It’s as if Tara understands and has forgiven her. In Episode 2 or 3, she’s having a dialogue with her in the car about the kids and private school – it’s as if she needs to have this conversation to continuously remind herself that what she did was ultimately an accident and that Tara would have forgiven her or understood. It’s kind of weird. And I love the way Katey [Sagal] is playing it, which is very simple and not, “I’m a crazy lady and I’m freaking out.” It’s as if you expect to turn around and see [Tara] there. It’s obviously showing the seams are somewhat busting on Gemma.

TVLINE | The premiere doesn’t show Wayne connecting the dots between a drunken, rage-filled Gemma fleeing in his truck and Tara turning up dead hours later. Does that come up later in the season?
No. He doesn’t find out that Gemma has ultimately given this lie to Jax until much deeper in the season. And once that happens, he starts to connect the dots.

TVLINE | Are Gemma and Nero officially back together now? It was sort of ambiguous.
It’s heading in that direction. Once Nero feels like he’s possibly getting a handle on the conflict that he’s in, then it might be safe for him and Gemma to spend time together again. At the end of last season, he was seeing this heading in a very bloody direction with him against Jax, and he didn’t want to pull Gemma into that conflict. Now he feels like, “OK, I’m potentially playing intermediary. I can maybe resolve this stuff.”

TVLINE | Does he love her?
I think her really does. It broke his heart to push her away last season. It’s a bit of a push and pull for the first few episodes. But I think, ultimately, they’re drawn to each other.

TVLINE | Lastly, Juice’s naked push-ups — was that a valentine to the show’s female and gay male fans?
[Laughs] To a certain extent. And it’s the fact that Juice can’t leave that space right now — he’s sort of trapped in that box — so he’s kind of losing it. But, yeah, it’s also like a “This one’s for you” to the fans.