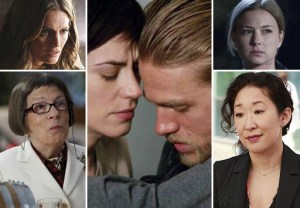 Question: Anything at all on the final season of Sons of Anarchy? —Jennifer
Ausiello: Tara’s spirit will loom large throughout the final 13 episodes, but Maggie Siff won’t be embodying that spirit. Asked if the actress might appear in a recreated flashback or as a vision to her widowed hubby, series creator Kurt Sutter tells me, “I’ve never done flashbacks or dream sequences on this show. They tend to pull me out of the reality of a show like this. Although The Sopranos used them very effectively with Tony, it doesn’t make sense for Jax to experience that.” Ironically, Sutter reveals that Tara’s presence will be most felt via Gemma (AKA the woman that repeatedly drove a meat fork into her head). “Gemma has this odd, remorse-[driven] dialogue with Tara throughout the season,” he previews, “as if she’s sitting right there next to her.” Bonus Scoop: There’s a Juice-centric scene in the Sept. 9 opener that will make the show’s straight female and gay male fans very, very, very happy.

Question: Any scoop at all about the fourth season of Once Upon a Time? —Advanteege
Ausiello: Is Henry en route to having his first crush? (And if so, has he picked the wrong gal?) The ABC series in casting the recurring role of Lily, a bright, self-reliant teen who boasts a “charming, take-no-prisoners punk exterior and the heart of a secretive, insecure opportunist.” Watch for this lass to first appear in Episode 5.

Question: Elizabeth Mitchell in Once Upon a Time?? Tell me more!  —Jacquelyn
Ausiello: You sound plenty excited by this casting — as are Lost scribes-turned-Once creators Adam Horowitz and Eddy Kitsis. “She’s awesome, we love her, we’re so happy to have her and we can’t wait for the audience to discover who she is playing,” Horowitz teases. Perhaps she’s playing someone… eeeevil? Answers Kitsis with a healthy dollop of sarcasm, “We never bring Lost actors on our show to be villains, so….”

Question: Any hint on Geena Davis’ Grey’s Anatomy character? —Tia
Ausiello: Shonda Rhimes would only confirm that she’s a surgeon. And she’s not being brought in to fill the void left by Sandra Oh’s Cristina. “There is a hole left by the loss of Meredith’s best friend, and we do not try to fill it — at all,” she insists. “That wouldn’t make sense.” Question: Can you shed any additional light on Kate Burton’s return to Grey’s Anatomy? —Becca
Ausiello: As Burton told us over the weekend at the Creative Arts Emmys (where she was a guest-actress nominee for Scandal), Ellis will be seen “in flashbacks, obviously.” Also pretty obvious: Said flashbacks will feature Richard and (a younger version) of their little love child, Maggie. “I am excited to see how the whole thing plays out,” Burton added, “because James [Pickens Jr.] and I never really explored [the Ellis-Richard] relationship.” Bonus Scoop: Burton has a history with her new TV daughter Kelly McCreary. “I totally know her,” she enthused. “She did Scandal last year, so I got to say hi to her in the parking lot. And now, funny thing is, it turns out I am her mama!”

Question: We know that the season opener of Castle starts right where we left off in the finale, but is there a time jump after those first initial scenes? —Rachael
Ausiello: Yes, the  Sept. 29 premiere features a time jump — and a rather significant one at that — but my lips are zipped about exactly when in the episode the clocks spring forward.

Question: I am dying to know the Castle Season 7 premiere title! —Sandra
Ausiello: The opener, which (per ABC) “promises to put Beckett through the toughest case of her career,” is titled… fittingly… “Driven.”

Question: Nashville Season 3 intel, please and thank you. –Naomi
Ausiello: I’ve got more detail on the circumstances that bring Dancing With the Stars‘ Derek Hough into the Music City scene: The biopic in which his character, Noah West, is involved chronicles the life of Patsy Cline — and one of the women on the ABC drama’s canvas also becomes somehow involved with the film (and with Noah…?). Question: Please tell me Victor Garber will be back in Sleepy Hollow this season. –Ava
Ausiello: Yep. The Alias alum will return for at least one episode as Ichabod’s disapproving pop, EP Mark Goffman tells TVLine. Bonus Scoop: The showrunner adds that we’ll meet Crane’s mom this season, too.

Question: Any scoop on what baby Hope will be up to in Season 2 of The Originals? — Ash
Ausiello: Sorry, Ash, nothing on that particular tyke, but it sounds like someone else will have babies on the brain. Producers are currently casting Ingrid, a supposedly barren young woman who will stop at nothing to be with-child — including lying to her husband. (Gee, if only there were a few witches in town who might be able to help her out….)

Question: Will Catherine be returning at all next season on Hawaii Five-0? —Kim
Ausiello: File that under Quite Possibly Maybe. “I’m definitely hoping to get [Michelle Borth] back, but I’m not sure when that will happen,” show boss Peter M. Lenkov told us. “But there will be some type of closure.” Until then, he says, “We’re playing a little bit of McGarrett mourning that relationship. Catherine is still [away] ‘doing the right thing’ and he understands that, but he’s heartbroken.”

Question: I’m a little disappointed Linden and her mom didn’t share a hug in their final scene together on The Killing. It really seemed like the scene was heading in that direction. I’m curious if a hug was shot and just not used?—Jaime
Ausiello: There was never a hug. “I think to have had a hug, or [any] physical gesture of forgiveness, would’ve felt false,” explains series creator Veena Sud. “Linden gave as much as she could in that moment by asking the question that was hanging between them, and giving this woman an opportunity to respond. But I don’t know that everything is repairable between people — especially in this situation.”

Question: Would love some NCIS: LA scoop, please — anything Hetty-related would be fantastic. —Michelle
Ausiello: Lest you suspect that the Hetty cliffhanger will neatly/quickly resolve itself as previous ones have, as Season 6 opens, “We actually see Hetty reach a point where she cannot resolve the situation herself,” showrunner Shane Brennan told Matt Mitovich. “She hits a wall, where she can’t do any more than what she’s done.” [Cue a rather unexpected savior.] Unrelated bonus scoop: Early on in Season 6, Rocky Carroll will cross over from NCIS to appear as Vance in “more than one” LA episode. Question: What can you tell me about Brian Hallisay’s character on Revenge? I’m still not over losing Aiden, and I can’t imagine Emily is ready to move on. — Kate
Ausiello: You’re right about one thing, Kate: Emily’s not ready to jump into a new relationship. But that doesn’t mean sparks won’t fly between Emily and Hallisay’s Ben. “In the scenes they’ve had together so far, they’ve had great energy,” showrunner Sunil Nayar says. “But we want to take our time with these things; Emily has so much she’s already dealing with, we don’t want to be casual about the next person she chooses to give her heart to. That said, there’s definitely an energy between them that we’re enjoying. We didn’t bring him on to be Emily’s love interest, but by the same token, we didn’t not bring him on for that.”

Question: Can I get a scoop of Parks and Recreation news? It’s the last season so if you could make it a double scoop that would be awesome! —Eddie
Ausiello: Sorry, one scoop is all I got. The title of the season premiere is “2017.”

Question: Any early buzz on how Doctor Who‘s new — and significantly grayer — star Peter Capaldi will differ from his predecessor Matt Smith? —Morgan
Ausiello: The Season 8 premiere, written by exec producer Steven Moffat, makes several overt references to the physical differences between the Eleventh and Twelfth Doctors (whose portrayers have a real-life age difference of 25 years) — including an extended and very amusing bit about Capaldi’s “independently cross” eyebrows. That said, Capaldi himself sounds game for whatever adventures his showrunner cooks up. “The first time you make an escape through a ventilation shaft is quite special,” he notes with a laugh. One future Season 8 installment, though, sounds a little less action-adventure and a little more introspective. Indeed, Moffat promises an episode exploring “What does [the Doctor] do when he’s got nothing to do?” (One theory: Recording DVD extras about “wibbly-wobbly, timey-wimey stuff.”)

Question: Will Scandal have some scenes shot in Washington D.C. this upcoming season? —Kyle
Ausiello: If not this season then (likely) at some point in the show’s run. “I wish, I hope, I want to,” Shonda Rhimes tells me, adding that “budgets, budgets, budgets” are the No. 1 obstacle to taking the show on the road to the nation’s capitol. “It’s expensive to go there, for any production. But we’d like to. We hope to. We’re trying to save our pennies.”

Question: Any details on Portia de Rossi’s Scandal character? —Paul
Ausiello: I tried mightily to get Rhimes to spill the beans, but all she would divulge is that the Arrested Development vet is playing “a very formidable person.” Actually, that’s a pretty decent tease, considering how tight-lipped Rhimes can be. I’m putting that in the “win” column.