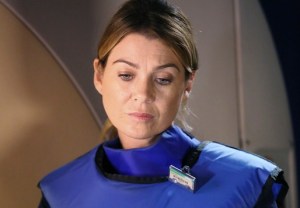 Ellen Pompeo is planning for life after Grey’s Anatomy — and there’s a strong possibility she’ll be spending more time behind the scenes than in front of the camera.

“I definitely don’t have a strong desire to act after Grey’s. I definitely feel myself transitioning. I don’t find acting terribly empowering,” the actress said during a BuzzFeed Brews panel discussion hosted by Kate Aurthur, alongside her fellow ABC “Shondaland Thursday” stars Kerry Washington (Scandal) and Viola Davis (How to Get Away With Murder).

Pompeo and co-star Patrick Dempsey closed new two-year deals with ABC last January that have them staying on Shonda Rhimes’ venerable medical soap through Seasons 11 and 12.

But the actress, who last month struck a deal with ABC to produce a potential series about a Boston female cop who becomes a police psychologist after a serious injury, said that where she really has fun nowadays is in “trying to find a book or an article or an idea and turn it into something.

Nevertheless, Pompeo refused to make any grand “I won’t set foot in front of a camera again!” pronouncements. “I would never say never,” she cautioned. “I try to keep an open heart and an open soul and spirit to whatever comes my way, and whatever is meant to be for me will be.”

That said, Pompeo said she feels she’s reached “the absolute top of what I can do in television, and I’d like to try a new sport and see if I’m any good… Grey’s is in like 97 countries and we’ve had this blessing of all these wonderful fans who still love us 10 later. I feel like I did it, and I don’t have anything else to prove.”

What do you think of the idea of a TV landscape without Pompeo in a leading role? Are you excited to see what she might do as a producer? Sound off in the comments!