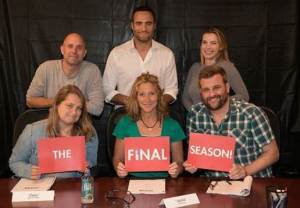 Nurse Jackie is getting ready to make her final rounds.

Showtime announced Wednesday that the show’s upcoming seventh season — which is set to premiere in 2015 — will also be its final one.

The cast of Nurse Jackie — including Emmy winners Edie Falco and Merritt Wever — helped break the news with a photo taken during the first table read for the Season 7 premiere (see above).

“Edie is one of our finest actresses,” said David Nevins, President, Showtime Networks, in a release. “We are so honored to have had her on the network. She creates indelible characters and Nurse Jackie Peyton is no exception. I know this final season will bring her story to a close that will satisfy the ever-growing number of loyal viewers who have been entranced and, at times, appalled by Jackie through the years.”

Showtime said “yes” to a Season 7 back in March — before Season 6 had even premiered — while noting that cast member Peter Facinelli was exiting the comedy.

Last month, the pay cabler broke the news that Emmy-winner Tony Shalhoub had joined the series in the recurring role of Dr. Bernard Prince, a new ER doctor who in addition to having “a great bedside manner and a special touch with his boss, Gloria Akalitus (Anna Deavere Smith),” will offer Jackie some desperately needed friendship.

Sad about Nurse Jackie coming to its inevitable end? Or is the timing right for a conclusion to this story? Sound off below!