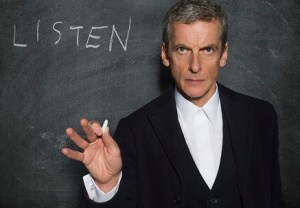 We’ve got questions, and you’ve (maybe) got answers! With another week of TV gone by, we’re lobbing queries left and right about shows including Doctor Who, Finding Carter, The Mindy Project and The Mysteries of Laura!

1 | Couldn’t Bill Maher have gotten literally anyone else to introduce his Live From D.C. stand-up special, instead of subjecting us to Keith Olbermann and Michael Moore’s clunky commentary?

2 | On a scale of 1-to-“Blink,” was Doctor Who‘s “Listen” episode the sci-fi series’ best installment in years?

3 | American Idol fans, how long did it take you to realize that Miss America contestant Jasmine Murray (aka Miss Mississippi) was also a Season 8 Idol alum? And didn’t Miss Ohio’s ventriloquist dummy bear an off-putting resemblance to the late Joan Rivers? 4 | Who wore it better: Nina Dobrev in this new Vampire Diaries cast photo or Mädchen Amick on Witches of East End? Speaking of the latter…

5 | How is Witches of East End‘s two-hour season finale going to top this past week’s episode​? We lost count of the major deaths after three.

6 | Are we to believe that Unforgettable’s Carrie “forgot” to tell us about this “husband”? What do you think the story is there? (And will we ever find out?)

7 | Admit it, even the geekiest of you out there: Aren’t the number of comic-book properties being eyed as TV series starting to make your eyes glaze over? 8 | Did any daytime talk show have a funnier fall premiere moment than Wendy Williams, who brought on a chef to prepare gourmet crow — which she promptly ate as a result of Kim and Kanye outlasting her prediction that their marriage would only last 72 days?

9 | Would Lolo Jones have avoided being the first Dancing With the Stars celebrity eliminated if she’d just kept her trap shut after her disastrous first routine? Or had her “Frankenstein with arthritis” moves already doomed her?

10 | Does recent America’s Next Top Model evictee Chantelle becoming the new face of Desigual’s Fall 2014 fashion campaign prove that the judges got it all kinds of wrong letting her go home so early?

11 | Remind us again, the significance of Under the Dome’s Julia being the “monarch”….? (Hey, Rachelle Lefevre just did!)

12 | What does New Girl have against Anna Paquin?

13 | On The Mindy Project, was Danny’s striptease more or less swoon-inducing than his flawless piano performance of “Let It Go”? 14 | Did this Sons of Anarchy scene give you Breaking Bad flashbacks?

15 | Forget Crash. All we need to know is: Will Max be back as a series regular on Finding Carter next season? We can’t think of a single reason why not.

16 | Is it at all possible that the Galaxy tablet commercial with Kristen Bell and Dax Shepard was a backdoor pilot for a half-hour comedy? ‘Cause we’d watch the hell out of that. 17 | Was this week’s Legends the best Home Alone sequel ever?

18 | Was Ross really undeserving of Rachel on Friends, as “Gunther” asserted to TVLine earlier this week? (For all we know, they’re on another break now, anyway.)

19 | Did any Red Band Society samplers think they’d make the mystery of Coma Boy’s dad be an ongoing thing, versus answered in the pilot? And how is it possible that Dave Annable looks even better with some grey hair? It’s not fair, right? Between this and a silver fox Kerr Smith playing dad to a teen on The Fosters, is TV making you feel old? 20 | Is one of The Mysteries of Laura how she got off this precision, high-risk shot at a hostage-taker while holding her gun pointed upward, not looking anywhere near the sight? And aren’t Laura’s twins a little, well, huge to still be in Pre-K? (For the record, a call to NBC publicity reveals that their portrayers, Charlie and Vincent Reina, are six years old.)

21 | Bridge fans, can we have a moment of silence for Linder’s beard?

22 | Did you cheer when the Project Runway judges finally came out of their Sandhya haze?