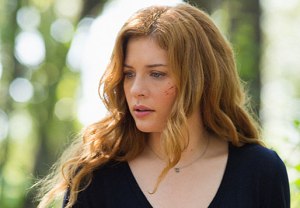 There are few things more intriguing to Rachelle Lefevre than a strong female character.

She’s played one for the past two summers, as the resilient Julia Shumway on CBS’ sci-fi drama Under the Dome, which airs its Season 2 finale on Monday at 10/9c.

And in her new movie Reclaim (now in select theaters and available on VOD),  she stars as Shannon, a desperate but tough woman who adopts a young Haitian girl with her husband (Ryan Phillippe) and uncovers a dangerous underground scam.

TVLine chatted with Lefevre about the Dome season ender and her latest big-screen role. Read on to learn about her toughest day in Chester’s Mill, her theories on that pesky egg and why she was drawn to the role of Shannon.

TVLINE | You said at Comic-Con that Under the Dome‘s season finale would be a cliffhanger in the most literal sense of the word. Any extra hints about how that tunnel to Zenith will play into the episode?
It will be involved massively. There is evidence of the possibility of escape. Obviously, Barbie left. And came back. [Laughs] So there is evidence that it is possible. If you know you can get out, you’re going to try. TVLINE | Ever since we learned that Julia is the monarch, we haven’t heard much more about it in Season 2. Will it come up again?
You’ll hear about it again. It’s not that it didn’t happen; of course it’s still relevant. But it definitely took a backseat when Melanie got introduced. Julia is the monarch now in the present time, but then Melanie comes back, who essentially seems like the monarch of her time, right? Melanie has all the same feelings that Julia has. She feels connected to the egg, but she can’t explain it. She wants to protect it; she doesn’t know why. She’s physically connected to it, in the opposite way that I am, which is kind of interesting. When bad things happen to the egg or when she’s separated from it, her health fails, whereas my character has been shot, impaled… [Laughs]…. stabbed in the ribcage to make a puncture-hole for air in her chest cavity. And somehow, against all physical odds, I’m sort of OK. And so, the implication from the end of last season is that my connection to the dome and the egg are somehow making me stronger. It’s an interesting juxtaposition between how her connection to the egg makes her vulnerable and mine makes me stronger.

TVLINE | But we’ve also seen Julia’s faith get shaken this season, since she’s up against Rebecca, who’s so rooted in science.
One of the things that’s been really tricky about that — and it’s been a challenge to play — is it’s not that Julia as a character is suddenly all faith-based. When you first meet her in the series premiere, she’s a journalist, she’s fact-based, she’s very pragmatic. I don’t think that’s gone anywhere. She’s had these feelings — I joke on set and I call them my Spidey senses. Whenever I have a scene where I have to say what the dome wants or I have to talk about the dome trying to protect us, I always go, “My Spidey senses are tingling!” [Laughs] She’s still very aware of her surroundings, and it is still fact-based in a way. It’s just that the fact of the matter is she has these feelings and these instincts she can’t explain. So, her conclusion is, “It must be that there’s something else going on that we don’t understand.” Which is not the same as going, “We shouldn’t ask questions, we don’t understand, we don’t have answers.” We might one day have answers about the dome. We might know why I feel connected to it. We might know why I have instincts that it’s going to protect us. But at this point, she is just going on faith. [Pause] Not that I think about it a lot. [Laughs]

TVLINE | Speaking of having faith, there is an insane amount of trust in Julia’s relationship with Barbie. Do you feel like that relationship has moved too fast? Will that cost them in the season finale?
They’re constantly being tested, and they’re definitely going to have something come between them. Their relationship has moved quickly in real time. But in situations of absolute crisis, things intensify so much, and they move at a faster pace. One of the things that I had talked to the writers about, that I tried very much to convey, was this idea that the end of Julia’s marriage was sad because she had failed at something, and she had missed the information. Like, “How could I have missed this?” But what she realizes is that they weren’t really in love. She didn’t really have a beautiful, perfect marriage. There were obviously trust issues. I don’t know how that would be a factor in real life, but certainly in life-or-death circumstances, it would make it easier to fall in love with someone else. TVLINE | Julia has had quite the harrowing season. Was there a toughest scene to film?
The ambulance stuff [in Episode 11] was pretty tough.

TVLINE | Surely it wasn’t actually that cold?
No, and that’s why it was hard. We were playing freezing cold when it wasn’t even close to that on stage, and I’m playing pain because I was impaled. And we were also playing the relationship, which always has to come first, right? The thing that was challenging about that was I couldn’t play every scene the same way. You can’t play cold and in pain and having feelings. [Laughs] People would be really bored. And also, levels of pain shift. Sometimes you manage to be distracted, and sometimes the pain is all you can focus on. It was really about taking those scenes apart and being very specific about the different places where the pain was going to be the most important thing, the cold was going to be the most important thing or the emotion was going to be the most important thing. That required some specific choices.

TVLINE | There’s no word yet on a third season, but do you have any of your own theories about what we might learn in a Season 3?
I absolutely have theories! I don’t want to give you any of them because I’m afraid to be right. [Laughs] I don’t want to accidentally be spot-on and then I gave it away.

TVLINE | So let’s talk about your new movie, Reclaim. It seems like Shannon is also very capable of handling herself in a highly dangerous situation. Was that an enticing part of the character for you?
It was. What I liked about it was the journey. I like the theme of being tested, both with people in real life and characters. I liked that journey, that she starts out soft and excited and a bit naive, as a result of her excitement. And then she finds the will to do things that, in a million years, she never imagined she would be capable of doing. TVLINE | Shannon and Julia are both very headstrong, accomplished women, as are many of the past characters you’ve played. Is that a priority for you when choosing new projects?
I would definitely welcome the chance to play a character who was a lot more fragile or broken. That would be a really great challenge. [Strong characters are] the thing that I naturally gravitate toward, because I just really, really love strong portrayals of women — women holding their own and being what I like to call “exceedingly capable.” [Laughs] We’ve come so far, which is great, but we still need more of that. Any female character that I feel like people can champion is really interesting to me.

TVLINE | Would you say Shannon is similar to Julia, or are those two ladies more different than we might expect?
For me, they were extremely different. They have qualities in common, which might make them appear similar. They both find strength, they’re both smart and, when physicality is required, they’re both strong in the physical sense. The reason they’re so different, for me, is because Shannon’s motivation for what she ends up going through is this child. She just wants to be a mom. And you don’t actually know what she does for a living, her career is not first and foremost. She really is family-oriented, and that is the central focus of her identity. And Julia, for me, was the opposite of that. She’s so career-driven. The one time that they do talk about kids in the first season, she doesn’t really want them, and clearly she wasn’t that engaged in her role as a wife. They just have really different priorities, and their strength comes from completely different places. And I loved playing a mom for that reason. It’s a different kind of strength.

Dome fans, what are your wishes for the Season 2 finale? Are you hoping for a Season 3 renewal? Drop a line in the comments section below with your thoughts.