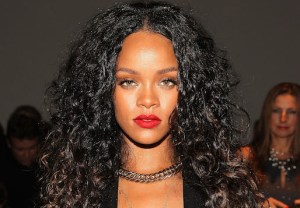 The original concept was for Jay-Z’s “Run This Town,” on which Rihanna is featured, to be sampled during the weekly telecast’s opening theme, serving as a bed beneath narration by actor Don Chaeadle. But for the Sept. 10 kick-off — which came amidst the Ray Rice/domestic abuse controversy — TNF dropped the opening.

CBS Sports chairman Sean McManus explained to Sports Illustrated that “journalistically and from a tone standpoint, we needed to have the appropriate tone and coverage,” though it is also believed that the NFL telecast did not want to risk evoking Rihanna’s own past as a domestic abuse victim.

Rihanna reacted to the decision this Tuesday morning on Twitter, saying, “CBS you pulled my song last week, now you wanna slide it back in this Thursday? NO, [F—] you! Y’all are sad for penalizing me for this….. The audacity.”

Shortly thereafter, CBS decided to permanently remove “Run This Town” from the opening, saying that TNF was “moving in a different direction” with its theme music, while Cheadle’s narration and other elements will remain.