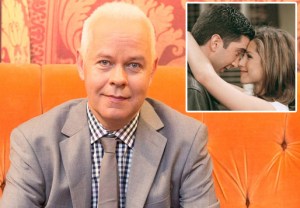 For 10 glorious seasons on NBC, James Michael Tyler‘s Gunther served piping-hot coffee — with a dash of passive-aggressive angst — to Ross, Rachel and the rest of the Friends gang. But how much did we really know about the platinum-haired barista?

Like most journalists who spoke with “Gunther” this week at Warner Bros. TV’s Central Perk pop up — open now through Oct. 18 at 199 Lafayette Street in Manhattan’s SoHo neighborhood — as part of the sitcom’s 20th anniversary celebration, I approached the conversation as a nostalgic fan. But as our game of Ten Questions became an unexpectedly deep dive into the psyche of the “seventh friend,” I discovered I was not prepared for the truth.

TVLINE | Let’s start with a biggie: Do you think Gunther felt badly about telling Rachel that Ross slept with the girl from the copy place?
Absolutely not. He cheated on her, are you kidding me? Ross doesn’t deserve Rachel. TVLINE | So Gunther is still bitter about them ending up together, in spite of everything?
Yes, Gunther’s pretty sad about it. … He wasn’t the happiest of characters. I think it’s because he had a very long commute, a lot of stops from New Jersey.

TVLINE | Did he really live in New Jersey? I’ve always wondered where he hung his hat.
It was never said, but in one episode, the writers had a scene where Gunther explains how he gets to work. There were a lot of trains and stops, and a couple of buses involved, so that would put him… where? Shell Beach?

TVLINE | And he traveled all that way just to work at a coffee shop?
Yeah, for $4 an hour. … Either that, or he sleeps in the back room [of Central Perk] on a little cot.

TVLINE | Let’s go with Jersey. Can you take us into his apartment? Is there a Rachel shrine?
That’s a bit creepy, but Gunther did purchase all of her furniture — everything she ever sat on or touched or used — so he probably does have all of her old stuff. It’s probably a small apartment, so he’d need to store some of it on the roof. 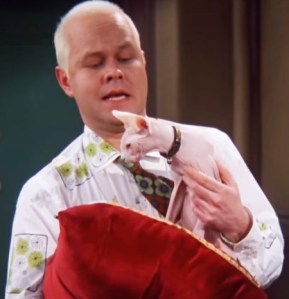 TVLINE | How long do you think he kept Mrs. Whiskerson? She was the worst.
Gunther and Mrs. Whiskerson were very similar in many ways. She was kind of like the feline version of Gunther, so I think they probably got along very well. She was kind of a badass, but also quiet. She didn’t say much until she just [makes exaggerated, accurate angry cat noise.]

TVLINE | And how did Gunther end up at Central Perk in the first place? I know he was a soap opera star once.
Well, he wasn’t necessarily a soap star, just a soap actor. And [his character Bryce] was killed in an avalanche. More than likely, he did outsider theater, somewhere off off off off off off off Broadway — all the way across the river in New Jersey. But you can’t really make a big living in that market, so he became a barista.

TVLINE | We never knew Gunther’s last name. Chandler guessed it was Centralperk, but he was wrong. Do you have any theories?
I didn’t then, but I have recently. I think it would be really funny if it was something like “Smith.” Something really standard. That’s funnier to me. TVLINE | Gunther was on Ross and Monica’s mom’s list of people she was allowed to sleep with. Do you think he ever took her up on that?
[Laughs] Oh, wow… That’s really taking the Friends universe to a place I don’t want in my brain. I think he would be horrified; this is Ross’ mom, are you kidding me?

TVLINE | But he hates Ross, so that would be the best revenge!
I don’t think Gunther’s that kind of guy. He wasn’t that creepy.

TVLINE | Lastly, catch us up. What’s Gunther doing today?
Hopefully he’s happy. And hopefully he’s matured, having gained some experience in life and love. I also hope he isn’t as socially inept as he was. And maybe he owns Central Perk and/or a franchise of Central Perks. … That would be a nice future for Gunther.

Friends fans, what do you think the “seventh friend” is up to these days? Do you have any favorite Gunther moments? Drop a comment with your thoughts on Friends‘ 20th anniversary below.