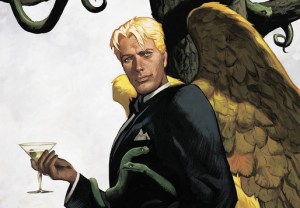 Fox is reportedly making a deal with the Devil.

A drama based on DC Comics’ Lucifer has been given a put pilot commitment* at Fox, according to our sister site Deadline.

The potential series would find Lucifer — who appeared as a supporting character in DC’s Sandman series before landing his own spin-off — abandoning hell to open a swanky piano bar in Los Angeles called Lux.

(*A put pilot is a deal wherein a network will owe a studio a significant monetary penalty if it does not air the pilot — and all but guarantees the pilot will be picked up.)

Your thoughts on Fox’s potential Lucifer series? Any casting suggestions? Drop ’em in the comments section below.