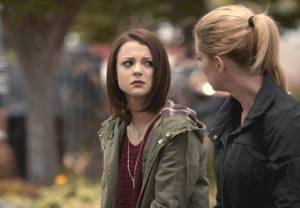 The final hour brought MTV’s freshman drama full circle, with Lori re-kidnapping Carter and Max waking up in the hospital… only to call it quits with Taylor. Also, can we talk about those photos? There’s apparently a lot we don’t know about what happened between Lori, Elizabeth and David in the ’90s.

Below, executive producer Terri Minsky gives TVLine the inside scoop on the finale’s biggest twists, including Lori’s possible motive for taking Carter (again!) and what really inspired Max’s heartbreaking decision.

TVLINE | After that cliffhanger, I feel like Season 2 could be called Finding Carter… Again! Is that accurate?
[Laughs] The idea was always that Lori abducts Carter again, this time against her will. When MTV called me and said, “We’re going to pick up the first season, but you need to have a great cliffhanger,” I was like, “I know what it is!” We were always headed for that abduction, but the question was how. When we were first planning the arc of the season, it was going to be a Christmas episode and Lori was going to selling Christmas trees — it was crazy. In the finale, we really felt like we had to answer some questions and have her interact with Carter for more than the usual abrupt, two sentences. TVLINE | I feel like, over the course of the season, Lori became less of a sympathetic character and more of a straight-up villain. Is that how we’re supposed to see her now, as a villain?
My idea for Lori and Elizabeth, because I’ve always thought of this as a mother-mother-daughter story, was that Lori was the fantasy mother and Elizabeth was the wicked stepmother prototype. The plan was that over the course of the season, the viewers’ attitudes about them would flip, but the characters themselves wouldn’t flip. I don’t think Lori changed, but we got to finally see the Lori that was capable of kidnapping a child. I feel both of their personalities are, fundamentally, the same as they were in the beginning.

TVLINE | Of course. In my head, David had an affair with Lori back in the ’90s, or whatever — but that’s just my theory.
Well, I have to say, I’ve enjoyed reading people’s guesses about what’s really going on. The thing I wanted to always be an underlying backbone for as long as I could is “Why did this woman abduct this child?” I knew that the backstory had to be something that, when we knew what it was, would inform the characters and how you thought about them moving forward. The backstory has not completely been told.

TVLINE | OK, let’s talk about Max, who might just be my favorite character on the show.
Mine too! We had no expectation of bringing him back after the pilot; he was just supposed to represent what Carter was leaving behind. When MTV picked up the show, the idea was that Max could come back, we’d build Season 1 around Carter making a series of bad decisions, and it would culminate in [Crash] killing Max. He was supposed to be dead at the end of Episode 10. That’s how the first draft was written. The doctor comes out, says Max is dead and we go black. That was it. Clearly, that was the stupidest idea ever. … He was going to be our Ned Stark, where we fearlessly kill the favorite character. Then the crouton scene started circulating around the same time as the draft was being written for Episode 10, and MTV called us up and asked, “Does Max have to die?” No episodes had aired, and once they started, we were like, “Thank God we didn’t kill him!”

TVLINE | Can you give me some insight as to why you decided Max needed to break up with Taylor? That was a crushing scene.
I wanted Max to come out of his situation changed. If he woke up and was just Max again, we would have wasted an opportunity with that actor, because Alex Saxon is super smart. He’s nothing like his character, yet he fully inhabits him in a way that I did not expect. Max’s entire description in the pilot script was “sexy stoner.” That’s it. But he’s taken it into a whole other dimension. To me, he’s become such a real person. So I wanted to see Alex play another side of Max, which is why he he reappeared at the end and broke up with Taylor.

TVLINE | That can’t be the last we’ve seen of Max, right?
[…radio silence…]

TVLINE | What about the other guy in Carter’s life? She doesn’t seem too upset about Crash being behind bars without bail. How are we supposed to feel about him at this point?
Crash is that guy you think you can fix, somebody with a giant hole at the center of him. Carter thought she could save him by appreciating him like no one else did. Carter had lost the one-to-one person she had a relationship with, which was Lori, and then she met Crash. He was a giant vortex that sucked everything out of her for as long as he could, and I’m actually surprised people liked them as a couple. I think the thing Caleb [Ruminer] did that was so genius was that he made you want to believe Crash wasn’t all bad.

Finding Carter fans, what’s your take on the season finale? Any new theories about Lori’s relationship with Carter’s parents? Whatever you’re thinking, whatever you’re feeling, let’s hear it in the comments section below. 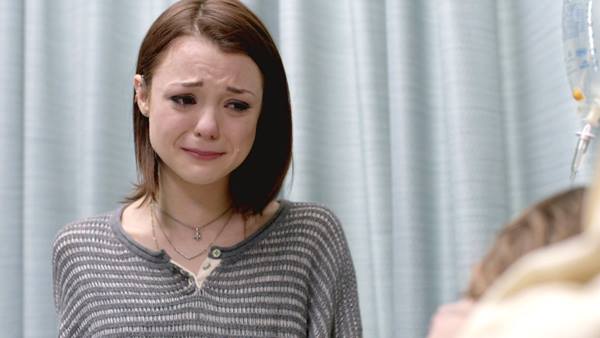