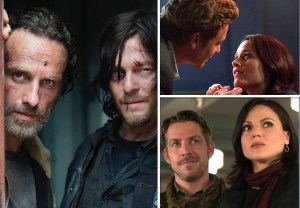 Is Once Upon a Time putting a twist on a triangle? Who on The Mentalist earned a promotion? Has The Walking Dead found sanctuary? Beast gains a brother? Read on for answers to those questions plus teases from other shows.

Can you give us any scoop on Once Upon a Time’s Regina, please? We need something to cheer us up! –Ana
Well, when I asked The Boys about the Regina/Robin Hood/Marian love triangle presumably on tap for Season 4, Adam Horowitz was quick to retort, “Who says we’re doing a love triangle?” He then explained, “Hopefully it becomes less about the relationship itself and more about Regina [and] open[s] the door to who she is and what she’s going to become.” (Anything further on the topic will have to wait for TVLine’s Fall Preview Spectacular, coming soon.)

Do you have any info on Belle’s mom on Once Upon a Time? –Natalie
Debuting in an Episode 6 flashback, Belle’s ma is described as “a strong-willed, spirited woman” who carries herself with grace and aplomb – even under the most trying circumstances. She’ll also boast a natural European accent, if casting has their druthers.

Do you know if there will be a time jump in The Mentalist‘s Season 7 premiere? –aelisjane Barely. I am hearing that Season 7 (premiering at “midseason”) picks up about two weeks after Jane smooched Lisbon all forrealz-like.

Do you have any scoop on The Mentalist? Anything at all? –Shena
When it rains, it pours. Hot off the presses, TVLine can report that Make It or Break It’s Josie Loren (pictured) has already been bumped up to series regular status, in the new Season 7 role of FBI rookie Michelle Vega.

What have you got on the next season of The Walking Dead? —Derek
I can exclusively reveal that the Season 5 premiere, airing Sunday, Oct. 12, is titled — drumroll, please — “No Sanctuary.”

Do you have any new scoops for Beauty and the Beast fans? Maybe a return date? –zavier
For Season 3 – which has a premiere date of Sometime in 2015 – the resilient CW drama is casting the role of Tess’ older brother Jamie, an overbearing lawman on track to become his kin’s commanding officer. Big bro will bust JT’s chops some, bringing out an impressive new side to Tess’ beau.

Since you had such a wonderful time in Cincinnati, would you give me, a Cincinnatian, a Brooklyn Nine-Nine spoiler? – Lindsey
Prepare to meet the parents! Episode 6 of the sophomore comedy – now airing on Sunday nights, remember! – will introduce us to not only Gina’s “eccentric” and “offbeat” mother, Darlene, but also Boyle’s “very New York Italian” father, who is named… Lynn? (And yes, Cincinnati was awesome.)

Will we see Paige Turco on NCIS: New Orleans, or is she too busy with The 100? –Daniel
Thus far, the latter. Scott Bakula’s TV wife is discussed/alluded to in the very early episodes, but thus far has yet to put in a physical appearance. And if you know how I famously feel about TV’s erstwhile Melanie Cortlandt, so much is about the physical.

This may be outside of your wheelhouse, but I saw your Facebook comment about it: Do you think Jennifer Aniston was genuinely pissed about Jimmy Kimmel’s “surprise” Friends reunion? –Des
Oh, my wheelhouse is a fluid beast. We made a point to ask around, and an insider told TVLine that Aniston was very much “in on the joke and totally on board with it.” That said, I still question her “acting choices,” at least once Friends “Phoebe” and “Mon” walked in.

Any news on Resurrection‘s new season? –Sherryl
Asked to compare Season 2 to the show’s freshman run, series creator Aaron Zelman told me, “In Season 1, so much happens so quickly – it was eight or nine days – so it was very reactive. Whereas Season 2 is a bit more, ‘OK, this is the new reality — now how do we live with this? What does it mean that people can come back? And what does it mean that people who came back can disappear?’ What does it mean for doctors like Maggie to treat people who are terminal knowing maybe they’re not terminal? It throws everything on its head. You’re going to see a lot more characters dealing with that new reality.”

Now that NBC has shown Parenthood promos confirming that Amber is pregnant, do we know if Matt Lauria is returning as part of this storyline? – Ann
As previously scooped, Ryan will resurface in Episode 3— undoubtedly pleasing his portrayer. “I would absolutely love to return,” Lauria had told me while out promoting his DirecTV drama Kingdom (premiering Oct. 8). After all, he noted, the Amber/Ryan storyline “ended in an open way.” (I’ll say!) But maybe there’s a third party to worry about? Lauria’s Kingdom costar/fellow P’hood alum Jonathan Tucker playfully interjected with his theory that “Mayor Bob Little, now that a few years have passed, will be able to take back Amber” — and without a fight! Silly lad.