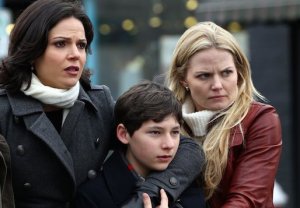 ABC’s Once Upon a Time is opening Season 4 with an 11-episode arc that introduces several characters from Disney’s Frozen, an animated blockbuster that most every rugrat has seen, like, seven times by now.

RELATED Once Upon a Time Season 4 Scoop on The Knave, Emma’s New Home

While Emma and Regina’s son for three seasons has watched characters from his storybook come to life (for better or worse), is he now about to drop his popcorn upon spying Queen Elsa of Arendelle (played by Fringe‘s Georgina Haig) leap from the big screen into Storybrooke?

As part of our all-encompassing, in-depth Fall Preview interview, I ran that burning question (which I believe was first raised by TVLine reader Gail; please collect your 500 Power User Points!) past Once creators Adam Horowitz and Eddy Kitsis, and the simple answer is no, Henry won’t recognize Elsa & Co. — and for a very good reason.

As Horowitz explains, Once “occurs in a semblance of real time,” starting with Emma Swan’s Oct 23, 2011 birthday aka the series premiere. With Season 2 encompassing less than a year, and even factoring in Season 3’s midseason time jump, “We calculated that we are now living in the early part of 2013,” Horowitz notes. Meaning, Henry not only couldn’t have seen Frozen (a late-November release) yet, but its first teaser trailer won’t hit the Storybrooke Cinema for months.

The other question on many a viewer’s mind is born of a Season 3 that revealed A) Peter Pan to be Rumplestiltskin’s father and B) the Wicked Witch as Regina’s half-sister. So, who in Storybrooke will wind up having family ties to Elsa, Anna or any of the other Frozen visitors?

In a word: nobody. (Cue many sighs of relief.) “We will go on record as saying that we are not going to reveal that, for example, Elsa is somebody’s sister,” Horowitz makes clear.