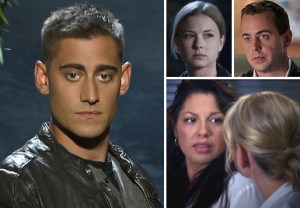 What are Once Upon a Time‘s plans for The Knave? Is an NCIS romance intact? Will baby talk be the death of Grey’s Anatomy‘s Calzona? Which Hawaii Five-0 cop is getting a blast from the past? Read on for answers to those questions plus teases from other shows.

As excited as I am for Once Upon a Time‘s Frozen storyline, I’m curious as to how The Knave (played by Michael Socha) is going to fit in in Storybrooke. Know anything about that? – Sarah
Do I! Just seconds before publishing this week’s Inside Line, I got off the horn with Once creators Adam Horowitz and Eddy Kitsis, the former of which said that The Knave’s “background as Will Scarlett, who was one of the Merry Men and a thief, comes into play very early.” Kitsis then added that for Wonderland fans, “We will be explaining why he’s in town. I can also say that he fits rather nicely into Storybrooke, and his introduction is a really fun one.”

Will Once Upon a Time’s Emma go house hunting or will she be living in that loft with Charming and Snow and a crying baby forever? –Shen
“Emma needs her own place, and we’d love for her to see it this year,” Eddy Kitsis agrees. And perhaps to that end, Adam Horowitz notes, “The domestic situation of the Charmings and Emma and Henry and Regina does fit into the early episodes” of Season 4, premiering Sept. 28.

Do you have any scoop on when Grey’s Anatomy‘s Calzona might start ripping off those “Band-Aids” that Shonda mentioned? –Jennifer
As part of our Fall Preview Q&A with Rhimes, she said that Callie and Arizona will start searching for a surrogate “fairly soon” — unexpectedly setting in motion said ripping. “It brings up some other issues for them,” says the series creator. “The speed at which they approach this and then the process [itself] illuminates some things for them.”

Is Revenge really not doing a flash-forward this season? It’s the show’s signature. –Jason
I can confirm that – tradition be damned — there will not be a flash-forward in Revenge‘s Season 4 premiere (airing Sept. 28).

Do you have any details on Hawaii Five-0‘s Matthew Williams storyline? –Sarah
When last seen during Season 1, Danny’s brother was on the run from the SEC. His current fate will be revisited “in an arc that ‘s going to play over the first five or six episodes,” show boss Peter M. Lenkov told me. (Concurrent with that storyline will be another arc, in which Jerry’s latest conspiracy theory “turns out to be real.”)

Just curious, is the actress that played McGee’s girlfriend coming back to NCIS, or are they done? –Chris
Through production of Season 12 thus far, Big Bang alum Margo Harshman has yet to reprise her role as Delilah – though, as show boss Gary Glasberg promised, McGee’s complicated relationship has not been dropped. In fact, I’m hearing that Delilah has been referenced several times already.

Will we see Colin Ferguson back on Haven? –lilslim
Outside of the “previously on” catch-up segment that opens up the Sept. 13 Season 5 premiere, no, you will not see William again – but make no mistake, his presence is very much felt through the first episodes.

Is Nashville killing off Tandy? Judith Hoag tweeted that she’s leaving after Season 3’s second episode. —Chris
The show is not whacking Rayna’s sis, but the character will be written out in the Oct. 1 episode. I hear the door is being left open for Tandy to return at some point, though that seems unlikely (at least in the near future).

Any news on whether Natalie Dormer’s Moriarty will make an appearance in the upcoming season of Elementary? –Mel
At this point in time, no — but lest you leave empty-handed, here’s a scooplet: Episode 5 will introduce us to Gregson’s daughter, an ambitious 20something cop rising up the ranks.

Any mild spoilers for The Originals? –Nasir
Now that Hayley is a hybrid, life will only get… hairier… for her. “Just when this woman found a connection to her werewolf ancestors, she’s now severed from that connection,” co-EP Michael Narducci observes. “For a lot of reasons — loss of her child, loss of her family, loss of her identity — she’s really going to be struggling. It’s going to push her to a place where she lashes out at everybody.”

Anything for The Following? –Giles
Ryan Hardy’s gonna be a dad! Sort of… ish. Season 3 newcomer Zuleikha Robinson’s character has a 7-year-old daughter who “fully embraces Ryan as a father figure” .

Real questions, real answers. If you need the Inside Line on a favorite show, email InsideLine@tvline.com! (With reporting by Andy Swift)