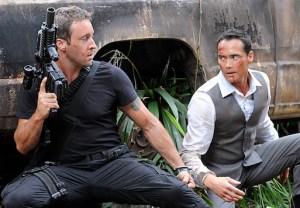 As CBS’ Hawaii Five-0 brought Season 4 to a close, Wo Fat broke out of a supermax prison — but to what end?

That latest mystery surrounding McGarrett’s ongoing foil — plus many others — will be answered in the series’ 100th episode, titled “If, Perhaps,” executive producer Peter M. Lenkov told TVLine as part of our Fall Preview Q&A.

“I’ll tell you this: If there are any lingering questions for people who have been loyally watching the show from the beginning, they’re all going to be answered in the 100th episode” aka the seventh episode of Season 5, Lenkov assured. “There really will be no more questions, as to, ‘Are [Steve and Wo fat] related?’ and ‘What is Wo Fat’s relationship with Steve’s mother?’ … That’s all going to come to a head and be resolved.”

Also during our all-encompassing preview interview, Lenkov addressed reports that, with Catherine barely out of Steve’s life, a new, yet-to-be-cast love interest already is on the way for the Five-0 boss.

“Everybody’s selling it as a love interest, but really it’s a friendship,” Lenkov said. “McGarrett meets a woman on the anniversary of his father’s death, and they share the common trauma of both losing a parent very early on. And that’s going to play into an arc.”