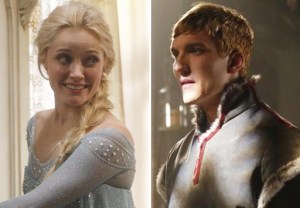 Teased before and during the San Diego Comic-Con, ABC’s Once Upon a Time now has released several photos from the Season 4 premiere’s introduction of the Frozen characters Elsa and Kristoff.

RELATED Once Upon a Time @ Comic-Con: Evil Reborn, Elsa’s ‘Surprise’ and More

Played by Fringe‘s Georgina Haig, Elsa’s TV incarnation will pick up some time after the animated blockbuster left off, with kid sis Anna (newcomer Elizabeth Lail) heading for her wedding to ice merchant Kristoff (Greek’s Scott Michael Foster). In a short teaser shown at Comic-Con, the sibs meet at their parents’ gravestones, where Elsa reveals that she has a wedding “surprise” for Anna.