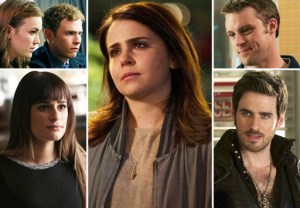 Question: Can you give us a teaser for the sixth and final season of Parenthood? —Ben
Ausiello: Remember that pregnancy test Amber grabbed in the Season 5 finale? Well, showrunner Jason Katims remains tight-lipped about the results, but he can confirm that Matt Lauria’s Ryan will return in Episode 3. Do with that information what you will!

Question: Any scoop on Agents of S.H.I.E.L.D.’s FitzSimmons? Any updates on Fitz’s storyline in terms of his injuries? —Stacy
Ausiello: Prepare to be mildly toyed with. Exec producer Jeff Bell told Matt Mitovich that as the Sept. 23 premiere unspools, Fitz’s fate will go unaddressed “just long enough that you think, ‘Oh my God, really? Aren’t they going to…?!'” — before finally revealing the 411 on everyone’s fave techie. But the bigger question may be: How is the lad’s heart? “The beauty of what [Fitz said to Simmons trapped underwater] is it makes for lots of complicated feelings,” Bell notes. “I’d be curious to see how things will be different or the same now.”

Question: Any intel about Arlene and Keith from True Blood? They are adorable together and I can’t get enough of them. —Lily
Ausiello: Not everyone will get a happy ending on True Blood, Lily, but I think it’s safe to say that Arlene and Keith will be among the lucky few. Though we’re not going to get another pool table scene, this Sunday’s episode does show the effect Arlene’s relationship with Keith is having on her. (Spoiler Alert: She’s a very happy woman.)

Question: Anything juicy on the remaining episodes of True Blood‘s final season? —Bookworm
Ausiello: “Juicy,” eh, Bookworm? How about one of the most highly anticipated sex scenes in True Blood history finally coming to fruition? Is that “juicy” enough for ya?

Question: There’s a Glee rumor going around that Rachel will return to Lima to relaunch New Directions — is it true? —Kelly
Ausiello: Actually, that rumor happens to be… true! We will, however, find out what became of the TV pilot she was developing with Bob’s Burgers‘ Kristen Schaal and Community‘s Jim Rash. We might even catch a glimpse of the final product. (I’m guessing its failure is what leads to the homecoming.) Question: Can you give us a hint as to what’s going to happen when Brooklyn Nine-Nine returns? —Charlotte
Ausiello: According to B99 boss Dan Goor, Season 2 will pick up “five to six months” after the events of the freshman finale. Asked if the flash-forward is tied to a special occasion, Goor would only reveal that the premiere contains “fun, big, juicy events that justify the jump,” adding that the episode “will try to address all of the finale cliffhangers.”

Question: Got any intel on Perception‘s midseason finale? – Barb
Ausiello: Kate and Donnie’s wedding “is starting to awaken things” in Pierce, Eric McCormack says. “Something will happen at the end of the summer that will shake him up enough that he starts to speak about other things he’s been quiet about for a long time.” And after the cliffhanger finale, there’s even more good stuff coming when the season continues this winter. “We get into a whole other area that I’m excited about, where we start to explore a bit more of his relationship with Moretti and all the stuff that’s been unspoken,” the actor adds.

Question: On Chicago Fire, there were a few episodes that seemed to make a “big deal” about Casey’s concussion/memory problems.   Then… it’s not mentioned again. What happened? Did they figure it wasn’t a storyline worth pursuing? —Ed
Ausiello: Shockingly, the building explosion won’t bring those issues back to the surface — at least not in the near term. “Casey has chosen to continue on with this injury that could, down the road, rear its ugly head for sure,” says EP Matt Olmstead. “But in light of the devastation of this collapse, it puts into perspective what he has in terms of counting your blessings, essentially. It could always be worse.”

Question: Do you have anything about Burgess and Ruzek from Chicago PD? —Allyson
Ausiello: The pair will keep things hot, heavy and under wraps in Season 2. “[Burgess is thinking], ‘I don’t want word to get out [about the relationship] because that will really ruin my ability to ever get into Intelligence,'” previews executive producer Olmstead. “But a couple things happen. One is, she just really likes Ruzek, and he really likes her. So they’re trying to keep it under the radar, though I can’t say that’s completely effective because people get wind of it.”

Question: Hey, avid reader of TVline here. Got any scoop on American Horror Story: Freak Show? —Kevin
Ausiello: Ryan Murphy & Co. are doing a 180 with regard to Gabourey Sidibe’s role in the new cycle. I’m told Freak Show will find her playing a well-off, impeccably tailored Barbizon School grad who comes back to town to deal with a family matter. In related news, did you see who’s playing her mum? Question: Has Sleepy Hollow cast the Succubus yet? —Janet
Ausiello: They have! I can exclusively confirm that Caroline Ford (Lake Placid: The Final Chapter) has landed the guest-starring role of Lilith — AKA the Succubus. Official character description, authored by EP Mark Goffman: You may have heard lore about the biblical creature called a Succubus. And as with all creatures on Sleepy Hollow, she comes with our own twist. Ethereal and seductive, Lilith drains her victims’ life force, leaving only desiccated husks behind. She’s drawn to desire, and hidden desires burn brightest, so she will reveal many secrets in her path of exotic destruction. Things in Sleepy Hollow are about to get sexy as—you know… hell.

Question: Will Once Upon a Time fans find out to whom Hook traded his ship? —Meg
Ausiello: Not anytime soon. “It’s definitely something I myself am wondering,” says Colin O’Donoghue, three episodes into shooting Season 4. Especially given the significance of the trade, in the name of helping Emma, “I would be intrigued to see exactly what happened there,” the pirate’s portrayer adds. “The Jolly Roger was his life for 300 years!”

Question: Thank you for the awesome Killing post mortem with Veena Sud. One burning question I had — did she ever consider killing off Linden? —Jacob
Ausiello: Yes, it was considered, although Sud adds it was never “seriously” explored. “But, certainly, it was a thought over the years. My feeling was, in order for the story to end, Linden either had to continue down this dark road, or find her way out of the valley of darkness. And I felt that Linden, deserved the latter ending. I didn’t want to kill her. I love her too much. And after everything she’s been through, she deserved some peace.”