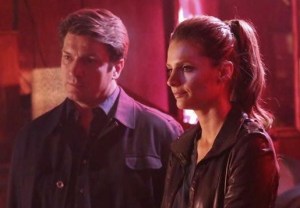 RELATED Why Did Castle Crash and Burn on His Wedding Day? Vote!

For starters, and to put a final nail in any scurrilous speculation, Amann was not promoted to showrunner in the name of “undoing” any perceived problems with the May finale, which left bride Beckett discovering the fiery wreckage of her groom’s car.

“Andrew and I have been working together since I arrived on the show five years ago,” Amann shared. “He’s still very much a part of the show and he’s going to be very much involved. The vision is going to remain the same.”

Meaning, Amann’s first order of business will not be to, for example, reveal in the September premiere that it was all just a dream. “No, that’s not what we’re going to be saying!” he affirms with a laugh. Adds Marlowe: “And when the fans see what we are doing, they’re going to be happy that it’s not a dream. We did what we did for a reason — to open up some new mythology, to have some really fun storytelling coming up. Those fans who are less-than-thrilled should reserve judgement until they see the first few shows of the season.”

Without revealing anything further about the who or why of Castle’s seemingly fatal car crash — other than to say the season premiere picks up immediately afterwards, with Beckett still in her wedding dress, distraught — Amann assures the show’s fans that the eventual impact on Rick and Kate’s romance will be an empowering one.

“We are as committed to their relationship as Castle and Beckett are — they are deeply in love and they have overcome a great many challenges already,” Amann says, “so whatever [has happened] is not going to tear them apart. If anything, it will make them stronger.”

Marlowe echoes Amann, teasing that “a lot of questions are going to be raised, but the two of them are going to face those questions together. We’re not looking to significantly alter the trajectory of their relationship or pull the rug out from under the audience. We’re looking to open up some really interesting aspects of storytelling for the Castle character, who hasn’t been as deeply explored as Beckett over the past six years — and we’re really excited by that opportunity.”