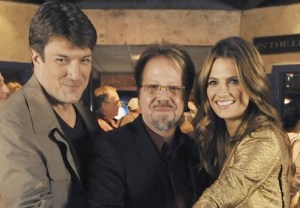 Here’s a twist that a certain rugged mystery novelist might not have come up with: Castle creator Andrew W. Marlowe is stepping down as showrunner, TVLine has learned.

Marlowe — who served as the ABC series’ showrunner through its first six seasons, the last of which was its most watched ever — will continue to maintain a day-to-day presence on the show while also starting to develop new projects as part of his overall deal with ABC Studios.

Succeeding Marlowe as showrunner, starting with the upcoming Season 7, will be David Amann, who joined Castle as an executive producer in Season 3.

“Over the past four seasons, David has proven himself to be a tremendous leader and a great steward of our show’s unique voice,” Marlowe said in a statement. “I’m excited to continue our creative collaboration as he assumes his new responsibilities.”

As a writer, Amann has had a hand in crafting some of Castle‘s best received episodes from recent seasons, including the post-coital Season 5 opener “After the Storm,” the intense “Under Fire,” “Disciple” and “In the Belly of the Beast,” and even the offbeat “That ’70s Show.”

What’s your reaction to this big Castle news and the announced succession plan?