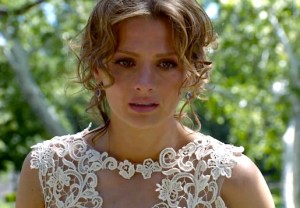 ABC’s Castle left fans pretty hot with its Season 6 finale, which ended with the titular mystery writer seemingly burned to a crisp inside his crashed Mercedes.

Seemingly being the operative word.

Because while Kate Beckett has no idea that she is a fictional character on a TV show named after Richard Castle and thus is allowed to genuinely fear the worst, the reality is that the stalwart ABC drama — coming off its most watched season ever — has not sent its male lead up in flames. “Nathan [Fillion] is signed on for Season 7,” series creator Andrew W. Marlowe assured TVLine after the finale aired.

So then, what was Kate laying witness to there in the finale’s final, fiery moments? If Rick is not in the car, where is he? And if this is all some spontaneously orchestrated ruse to fake Castle’s death, who masterminded it and why?

Marlowe acknowledged that there are “a lot of interesting folks out there” — including but not limited to 3XK or his plastic surgeon groupie (played by 24 alum Annie Wersching) — who could have been behind the wheel of the black SUV that last was seen pulling up alongside Rick’s car.

Rewatch Kate’s fateful phone call (cued up below), then review our poll options and share your predictions for how the cliffhanger will shake out.