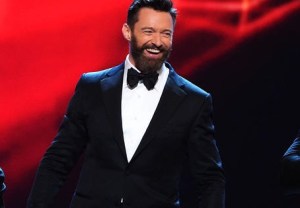 We’ve got questions, and you’ve (maybe) got answers! With another week of TV gone by, we’re lobbing queries left and right about shows including Mistresses, Awkward, The 100 and Suits!

1 | Is there any better testament to Hugh Jackman’s talent than the fact that, early on during his fourth stint as host of the Tonys, we stopped noticing that he was sporting a beard that made him look like Tevye from Fiddler on the Roof? And while watching the Les Miz performance, we couldn’t help but wonder: How has TV not given us a The Thenardiers sitcom yet? But was that awkward, lackluster Rocky number/“fight” supposed to make us want to shell out $150 to go see it?

2 | Game of Thrones fans, on a scale of Ned Stark to Joffrey Baratheon, how happy were you to see Sam live to fight another day (and kiss the girl!)?

3 | Did anyone think Veep would actually go there and make Selena President of the United States? And when Selina and Gary were cracking up in the bathroom, do you suspect that was Julia Louis-Dreyfus and Tony Hale ad-libbing and having their own fun?

4 | After how horribly Devious Maids‘ Adrian treated Evelyn last season, wasn’t it a bit gratifying to see how shaken he was to see her happy with Tony?

5 | Could Randy’s exclamation of “Emotions!” on Enlisted be the sign of a burgeoning crush on Sergeant Perez?

6 | Mistresses‘ paint-splattered, right-on-top-of-the-canvas sex scene: Crazy hot or just plain crazy? And what did you think of the resulting abstract painting that Daniel wound up sending to April’s shop?

7 | Maybe it’s the accent, but on 24: Live Another Day didn’t the soft-spoken British PM’s TV address about the imminent terror attack sound positively quaint? But really, why doesn’t this guy (and Heller, for that matter) have a dozen anxious aides/crisis consultants milling around, with a massive drone strike looming over London?

8 | After Louie‘s 90-minute episode revealed how the titular comedian got into drugs as a kid, wasn’t it a bit disappointing that Louis didn’t have a more serious heart-to-heart with his daughter at the end of the show?

9 | Have we reached the point on So You Think You Can Dance‘s audition rounds where we can no longer truly enjoy a contestant whose routine is preceded by an interminably long tale of woe about a relative or friend’s death/illness/addiction? 10 | Whose badminton footwear is more ridiculous: The I Wanna Marry ‘Harry’ girls in boots, or the supposed Prince in $10 flip-flops?

11 | TV’s Fargo is totally darker than the movie Fargo, dontcha think? And how much (more?) are you hating Lester, given what he just did to his new wife?

12 | What is the deal with Awkward‘s Eva? If it’s not revealed that she’s an escaped mental patient, will you lose it? And did anyone else feel the love between Jake and Lyssa this week? (We wouldn’t be against those two rekindling their Season 1 romance.)

13 | After watching Faking It‘s out-of-left field Liam and Amy hook-up, aren’t you 50 shades of grateful that MTV renewed the show for a second season? (Side note: What do we need to do to recreate our own Ghost fantasies with Liam Booker?) 15 | Were you rooting for Playing House‘s Emma and Mark to kiss when they got crazy-close while painting Maggie’s kitchen, or does the local cop’s marriage prevent you from fantasizing about a reunion for the former couple — despite their obvious chemistry?

RELATED | The 100 Post Mortem: Who Lived? Who Died? And What Was That Ending?

17 | Didn’t Graceland putting Briggs and Charlie together just seem so natural? But is sad sack Johnny already kind of a buzzkill? 18 | On Suits, is Mike’s secretary too much like Donna? Wouldn’t it have been a nice change of pace to see a Miss Blankenship type?

19 | All right, help us settle this: Was Lena Dunham’s interpretive dance to Sia’s “Chandelier” really funny, or just plain weird? 21 | Has the AT&T’s “Whispering Parents” spot taken over as Most Annoying TV Commercial? And is the DirecTV/Marionettes campaign currently reigning as the Creepiest?