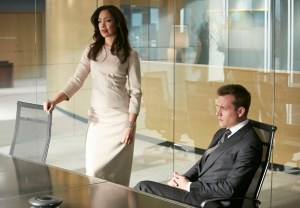 Warning: If you have yet to watch Wednesday’s Season 4 premiere of Suits, avert your eyes now. Everyone else, read one…

Specter vs. Ross is officially on!

Suits‘ Season 4 premiere found Mike putting Pearson Specter under review and concluded with the two men on opposite sides of a takeover battle. Then Rachel added another wrinkle to the fight, revealing to her boyfriend that she once had an affair with Harvey’s client, Logan (played by Lie to Me‘s Brendan Hines), who’s after the same company as Mike.

Meanwhile, SEC prosecutor Jeff Malone (24‘s DB Woodside) strong-armed Jessica — who he’s also seeing romantically! — into giving him a job at the firm so he wouldn’t come after them. But after witnessing Harvey and Scottie’s unsuccessful attempt at balancing a relationship while working together, Jessica put an end to her dalliance with Malone.

CLASH OF THE TITANS | Mike and Harvey being on “opposite sides of the table is going to affect their relationship in a lot of ways,” says Korsh. “It’s like they’re now going toe-to-toe with each other [to] find out who’s better. It’s going to bring out both great things in them and not-great things.”

WEAPON OF CHOICE | Rachel working alongside Harvey while her boyfriend is on the other side of the battle “will affect [Rachel’s] relationship with Mike, her relationship with Harvey and certainly, sometimes, she and Donna are going to be affected by this,” previews Korsh. But will Harvey continue to hit Mike where it hurts, using or not using his girlfriend? “As the takeover battle continues in intensity, both Mike and Harvey ratchet up their tactics to win, and sometimes, they will take those tactics personally. Sometimes, they are personal, and sometimes, they’re not. Their relationship is going to go through some struggle over the course of the season.” WORK, INTERRUPTUS | Can Rachel even stay on the case alongside Harvey given her history with Logan? That will be the big question next Wednesday. “They work it out in Episode 2 — or at least they think they work it out,” shares the EP. “Then we find out if it really works out in future episodes.”

BUSINESS AND PLEASURE | Although Jessica put the kibosh on her new romance, “Malone is not just going to go quietly into the night and just work at the firm,” confirms Korsh. “He wants her. So that’s going to be a struggle with them over the course of the season.” Meanwhile, his gig at Pearson Specter paves the way for a new, “bulldog” SEC investigator (played by Neal McDonough) to come after the firm and “cause us a lot of problems.”

FIGHT FOR POWER | “Louis thought he was going to take the job that they end up giving to Malone, and he’s going to be very bitter about it and very sad,” previews Korsh. “He’s going to have some conflict with Malone, and Katrina’s going to be involved in it a little bit,” as will Donna.

Suits fans, what did you think of the season opener? Are you enjoying a more antagonistic Harvey and Mike dynamic? And did the Logan twist surprise you?