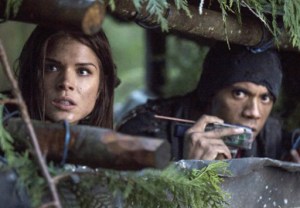 The 100 ended its freshman season with a bang Wednesday — several bangs, actually — and cleared the deck for a radically different Season 2. (Warning: Spoilers ahead!)

Before we get into executive producer Jason Rothenberg‘s explanation of the finale, let’s see how everybody left off: Chancellor Jaha sacrificed himself to get the rest of the Ark residents to the ground; Lincoln helped an injured Octavia escape in the heat of battle; Clarke and the remaining survivors, with Anya in tow, were kidnapped by “Mountain Men” and taken to a high-tech, top-secret location; and Finn (possibly) sacrificed himself to save a fellow hundred.

Below, Rothenberg breaks down the finale’s biggest surprises, discusses who did (and didn’t) survive the hour, and offers an early look at the insanity of Season 2.

TVLINE | That was not how I was expecting the finale to end. It’s going to be a completely different show next season.
In many ways, it will be, for sure. Obviously the Ark is on the ground now, for the most part, so we don’t have that to cut back to. But we will have Mount Weather, which will function — certainly aesthetically or energetically — in a similar way. We’ll cut back and forth between the exploding-with-life wilderness to this claustrophobic, airless, dying world inside the mountain. We’re also exploring the world much more completely in Season 2, as opposed to just staying in the perspective of the 100, who know almost nothing about the world. Lincoln and Octavia take us into the Grounder world; Clark, Monty and the other 47 people in the drop ship take us to Mount Weather; and everybody else is trying to find those people.

TVLINE | That would be Abby, Kane and the rest of the Ark residents?
Oh, we’re definitely going to deal with what happens when mom and dad show up at the party. TVLINE | You left quite a few fates open-ended. Let’s start with an easy one: Jaha has to be dead, right?
[Laughs] No comment. … When we left him in the finale, he was alive. He raised his glass to the people on the ground and said, “Til we meet again.” So we haven’t seen him die, but obviously, his story is over. He’s completed what he thinks is his mission, which was getting the people to the ground. Like Moses, he got his people to the Promised Land, but he’s not allowed to enter the Promised Land, himself. I love that character, and I love Isaiah Washington’s performance, but that’s a story that’s run its course. How would we justify giving him a reason to go on? We’ll see what that is, if it is.

TVLINE | Someone I’m more confident about is Finn. Please give me hope that he survived the blast.
Well, a lot of lives hang in the balance at the end of the episode, obviously. This is a show where life is precious. People die, and violence has real ramifications. I don’t want to speak too much about who lives and who dies until we reveal that next season, other than to say that one of the things I think that works successfully for us is that notion of not knowing how it’s going to end. The shows that I love — Game of Thrones and The Walking Dead in particular — do that very well. Frankly, I don’t think we’ve done enough of it, so maybe things will get worse before they get better.

TVLINE | Is it safe to say these “Mountain Men” will be the new enemies of Season 2?
I think that’s also up for interpretation. One of the things we’ll definitely be explaining is how these worlds, these groups of people, relate to each other. Who’s at war, who has alliances and where do the people from the Ark fit into that? Nobody on this show is evil just for the sake of being evil; they all just have their own security in mind. That’s how you ground things in reality, though I must say the Reapers come close. They have a reason for the way they look and what they do.

TVLINE | We didn’t see too many romantic developments this week. Can we expect more next season?
For me, that’s not what the show’s about, and I don’t think anyone will be surprised to hear me say that. Relationships and romance have their place in this world, but in terms of importance, these characters are much more worried about surviving than who’s sleeping with who. The relationship between Clarke and Raven, in particular, is something I’m proud of because those two women who love the same boy never let that get in the way of what they need to do with and for each other. It wasn’t like a catty, girls-fighting-over-a-guy story. Ever.

Fellow Grounders, what did you think of The 100 finale? Is Finn really dead? What about Chancellor Jaha? Rate the episode below, then drop a comment with your reviews and theories.