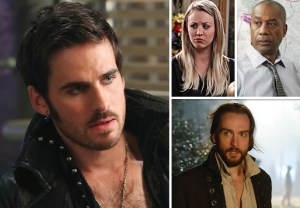 Will guilt detour a Once Upon a Time romance? Is Big Bang‘s bride-to-be due for a big makeover? What’s fishy about Sleepy Hollow‘s new casting call? Read on for answers to those questions plus teases from other shows.

RELATED | Once Upon a Time: Which Frozen Characters Are Being Cast?

Now that Once Upon a Time’s Emma and Hook kissed, and she let go of her walls and fears, is a CaptainSwan relationship possible, or is it too soon? –freak91
Just because old issues have been put to rest, you can count on new ones arising. “There will be some challenges for them,” cocreator Adam Horowitz teases. Eddy Kitsis elaborates, saying, “The very first obstacle is Emma’s guilt over the fact that she just destroyed Regina’s relationship [with Robin Hood],” by transporting Marian to our world. “So there’s a part of her that feels guilt in starting a new romance of her own.”

A Season 2 premiere date is a start. But do you have any Sleepy Hollow scoop to follow up? –Claire
Can I interest you in one of the most curious casting calls I’ve seen in a while? For Season 2, the Fox hit is filling the guest role of Mary, an old flame of Ichabod’s who is as sweet as she is prone to moody fits of jealousy. But that’s not the fun part. This is: Interested actresses “must be comfortable working in the water” and “with wearing prosthetics.”

Any scoop on Beauty and the Beast is much appreciated. Many thanks! –Anna
Oh, you say that now. But then I go and share this Kristen Kreuk tease about the season finale, and…. Well, just read it. “I think the fans would have been pleased [it had been a series finale], but what does happen is there’s a question that [Catherine and Vincent] have to answer about their future and how they want to proceed.” All told, she says the season ender is “rather emotionally traumatic for everybody.” So? Am I still appreciated?

Do you remember the rings on Haven? Nathan found his after his dad’s death and Audrey got hers from Vince. Will we find out something more about those in Season 5? –Natalia
I can assure you that yes, the rings will play a role in the show’s supersized new season.

I like the idea of Lydia being a banshee on Teen Wolf, but are we ever going to find out what she did in the woods when she went missing at the start of Season 2? –Erica
Season 2? Sorry, but I think we both know Teen Wolf isn’t big on going back and revisiting old story lines, especially from the Jackson era. But if you like the idea of Lydia being a banshee, you’ll love Season 4. In the June 23 premiere alone, Ms. Martin comes in contact with someone who knows more about her powers than she does — and who forces her to predict an imminent death. The Big Bang Theory news? –Alexa
How about some big scoop on Kaley Cuoco-Sweeting’s very big haircut, and how it might affect Season 8? Kaley clipped her locks (the first time) just prior to the show’s wrap party, yet when she walked in, she tells me, “The producers loved it.” She has since evolved her ‘do into an outright pixie cut, and thus far has not heard boo, so… good news? “I’m hoping Penny will keep the haircut, that’s my goal,” Cuoco-Sweeting shares, noting: “The finale wasn’t a ‘To Be Continued,’ so I don’t see any problem with it. People change, people get haircuts, so I think this is a realistic move for Penny. Fingers crossed!”

I would enjoy some Scandal scoop! –Kyle
If you fretted that Joe Morton’s new role on the TNT drama Proof would translate into less Papa Pope, don’t. At least not yet. Morton told me that production on the Jennifer Beals-led series doesn’t begin until January, so Scandal has dibs on him at least through the first half of Season 4. (I also asked the estimable actor for his thoughts on Rowan offing POTUS’ teen son: “I was pleasantly surprised” that they went there, he offered. “I thought it was a perfect way to end the season.”

What we are to expect from Season 2 of The Witches of East End? –Amber
If you’re at all fuzzy on the final moments of the Season 1 finale, you’re in good company. Thanks to some mystical Asgard juju, the Beauchamp ladies don’t remember anything after Penelope’s death — which is probably a good thing, especially for Freya. And speaking of Freya, don’t expect a Frillian reunion anytime soon. Dash’s brother may have survived that attack, but he’s nowhere near East End when Season 2 begins.

Can you confirm if Nadine Velazquez is a series regular for Season 3 of Major Crimes? –Kevin
I can confirm that the My Name Is Earl alum is not a series regular, and as of press time has yet to be booked for a Season 3 encore.

Any last-minute scoop on The Fosters? – Abby
In the new season, premiering June 16, Callie “discovers a lot about her past that she wasn’t aware of,” Maia Mitchell previews — and she’s not just talking about the twist that her dad isn’t her biological father. The bio dad news will, though, leave her brother Jude “concerned because they’ve done everything together and it’s this whole part of her life that he will never be able to be a part of, that he is not involved in. That causes him some anxiety that you definitely see come out later on in the season in a way that I can’t tell you yet.”

What happened to Detective Sully from Castle? After Beckett got her job back, he just disappeared! –Larissa
I delivered your need for Season 6 “housekeeping” to show boss Andrew W. Marlowe, who explained, “Sully is simply working one floor up. He’d come visit more often, but he’d stop the show. And who can afford that in today’s TV climate?”