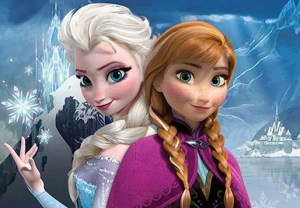 Once Upon a Time is planning a big chill for Season 4, with the introduction of not just Queen Elsa but other Frozen characters as well.

TVLine has learned that casting is now underway for the aforementioned conflicted ice queen — who was glimpsed (and played by a stand-in) at the close of Season 3 — as well as her sister Anna and ice merchant Kristoff. Elsa will appear in approximately nine episodes, the others a bit less. (Hey, maybe Kristoff runs Henry’s favorite ice cream shoppe?)

And before you ask: As previously reported by TVLine, the show bosses laughed and offered a “No comment” on the prospect of a CGI Olaf showing up.

In Disney’s animated blockbuster, Elsa, Anna and Kristoff were voiced by Idina Menzel, Kristen Bell and Jonathan Groff. The ABC’ series’ character breakdowns are below — spoilers for the movie Frozen, be warned! — so give ’em a close read and hit the Comments with your dream casting suggestions.

ELSA | The Queen of Arendelle, this late-20s/early-30s beauty long struggled to control her “chilling” powers and even unleashed upon her town an eternal winter during her coronation. Ultimately, she realized that the key to controlling her powers is love — namely, her bond with sister Anna — and now she is aware of the threat she poses if she were to lose control of her magic again (in which instance Vancouver weather could rival Winnipeg’s!)

ANNA | Elsa’s slightly younger sister is a fun-loving, fearless optimist who often gets herself into situations where she is in over her head, yet is able to triumph due to her resourcefulness and can-do spirit. She values her relationship with her sister above all else.

hearty, salt-of-the-earth ice cutter spent most of his life alone (unless you count his reindeer). He has a sometimes-gruff demeanor that can hide his deep love for Anna and her sister Elsa. When we first meet Kristoff on Once, he is adjusting to life at the castle — including sleeping indoors for the first time in his life.

Want more scoop on Once Upon a Time Season 4? Email insideline@tvline.com and your question may be answered via Matt’s Inside Line. UPDATE: Do not email me about “audition” information.