ABC’s Once Upon a Time at the close of Sunday night’s two-hour Season 3 finale served up a chilling twist, when it was revealed that in the course of time-traveling to and from The Fairy Tale Land That Was, Emma and Hook brought back to Storybrooke an uninvited guest. TVLine invited series creators Adam Horowitz and Eddy Kitsis to clear the air on the new character’s identity as well as weigh in on the heartbreak they threw at Regina, in the form of a different blast from the past.

TVLINE | First things first: Who are we looking at there at the very end?
ADAM HOROWITZ | That is Elsa. We fell in love with the movie Frozen when we saw it, my daughters are obsessed as is Eddy’s son… It is something that ever since we saw it would gnaw at us, “Is there a way to fit it into our world?” And we cooked up a way to do it. We pitched the studio and the network and they were kind enough to say, “Go do it.”
EDDY KITSIS | What’s funny is that people think Disney called us up and was like, “You need to do Frozen,” and it’s really actually quite hard to get these characters. It’s not like they call you up and say, “We’d like you to do this.” It’s actually quite the opposite. You have to work at it and have a vision and the spirit.

TVLINE |  Right, for something as fresh in pop culture as this, it’d seem you have less leeway.
HOROWITZ | Look, we had an idea for how we wanted to approach this story, and we are very well aware of how beloved the movie is, so we’re very careful that we want to tell a story that is uniquely ours but also honors that movie and those characters that everyone fell in love with this past year.
KITSIS | The thing we  love about Elsa is she is a character that is perceived to be a villain but is clearly misunderstood, and that goes to the heart of our show.

TVLINE | Does she have a history with Rumple? He seemed a bit afraid of that chamber she was locked up inside.
KITSIS | It seems like they’ve crossed paths….

TVLINE | Is this role Maggie Grace’s or Elizabeth Mitchell’s to lose?
HOROWITZ | We are so excited to dive into the process of casting. We literally delivered the final [cut] of the finale on Friday…
KITSIS | … and now we have two weeks off. When we come back we’ll start dealing with casting.

PHOTOS | ‘Ship Shape: How Your Fave Pairs From Once Upon a Time, Revenge and Other Shows Are Faring

TVLINE | Moving on to Maid Marian: Obviously the Regina fans are none too happy this morning. To quote one, “Why did you go to the trouble of redeeming her only to crush her heart all over again?”
HOROWITZ | Heres the thing: What we feel like we’ve done with Regina over three years is grown the character. She has changed and evolved, and this doesn’t change that. What it does is it changes the way she reacts to this. That’s the drama for us — how does this “new” Regina deal with this kind of adversity? We’re throwing a challenge in her way. This is not about her suddenly becoming that character we met three years ago.
KITSIS | Also, there’s Emma’s side of this — does she feel any guilt? She saved someone’s life, but in a lot of ways crushed someone’s [life], just like her mom did. We’d like to play out the reality of all this.
HOROWITZ | [Regina and Emma] are in new place. That doesn’t just go out the window. If it did, what would have happened at the end of the finale is Regina’s eyes would have glared red, she would have conjured a fireball and Emma would be toast.
KITSIS | I disagree — she would have tried to do a heart-rip first, and when she couldn’t do that, then she would go to fireball.

TVLINE | Will you be playing a love triangle, or will Robin Hood up and bail on his new love?
HOROWITZ | We’ll just have to wait and see.

TVLINE | But Robin Hood did think Marian already was dead before Regina went to execute her, right?
HOROWITZ | To clear it up: In Season 2 we saw Marian ill, which is why Robin was trying to steal the wand from Rumple. And then she was cured, and she went on to give birth to Roland. In Season 3, Robin Hood talks about how he lost his wife — not from the illness but a whole separate thing. So something clearly happened that we’ll explore next season, where they were separated and she died — and he certainly didn’t think the Evil Queen killed her. There’s a story there to be told.

TVLINE | Can you confirm yet that Sean Maguire will be a series regular for Season 4?
HOROWITZ | What we can say is we certainly hope to have him back next season — as what [status of cast member] remains to be seen.

RELATED | Once Upon a Time Finale Recap: That’s the Power of Love — Plus: A Chilling Final Twist!

TVLINE | And then we have Emma and Hook, who outside of the Charmings are now Storybrooke’s most stable relationship!
HOROWITZ | Give ’em time. [Laughs] They had a nice moment, but we’re not fast-forwarding to ordering in Chinese and watching movies.

TVLINE | Who in the writers room gets credit for “Princess Leia”?
KITSIS | Give credit to “the writers room of Once Upon a Time,” a room of Star Wars geeks staring at the life-size Boba Fett helmet in Adam’s office. So when she started to say, “Princess…,” the entire room went, “Leia!”

TVLINE | All told, how much fun was it Back to the Future-ing the Snow/Charming meet-up?
KITSIS | Whenever Adam and I are asked, “What’s the script you wished you wrote,” it’s always Back to the Future. We wanted to write [the double-episode finale] like a two-hour movie, so it was like, “Let’s go for it.” We knew that the theme for this second half was “There’s no place like home,” so we really wanted to thematically watch Emma see what it was all about. It’s probably the most fun we’ve had.

TVLINE | And one last bit of housekeeping: All of the friendlies who were turned by Zelena into flying monkeys were returned safely?
HOROWITZ | Yes. We saw Aurora smiling happily at the baby naming…. Grumpy explained that she did not give birth to a flying monkey. What happened with her was the pregnancy was put into stasis as she was monkey-fied. Now she’s back to where she was.

Want more scoop on Once Upon a Time Season 4? (I have mad leftovers!) Email insideline@tvline.com and your question may be answered via Matt’s Inside Line.

NEWLY RELEASED ONCE UPON A TIME FINALE PHOTOS

If you like TVLine, you'll LOVE our email news alerts! Click here to subscribe.
Once Upon a Time Creators Talk Regina's Blast from the Past, Confirm Season 4's Frozen Twist 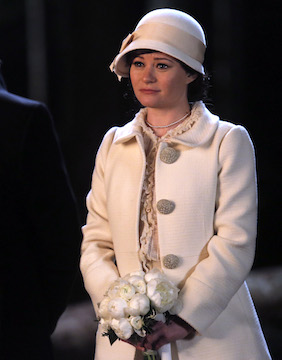