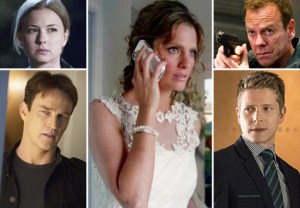 Question: Anything on Castle? The hiatus is already too long. —Rachael
Ausiello: Viewers will witness the immediate fallout from Rick’s fiery car wreck, confirms series creator Andrew Marlowe. Translation: no time jump. (And thus more Beckett wedding dress, albeit possibly singed.) “We feel like, given the way we left off, we have an obligation to start exactly where we ended,” explains the EP. “So we’ll be picking up in real time.”

Question: Any spoilers on True Blood? –Courtney
Ausiello: Any spoiler, Courtney? How about what’s sure to be the most talked-about sex scene in True Blood history? And yes, it’s crazier than that time Bill climbed out of his grave and had sex with Sookie in the graveyard. This same-sex hookup, between two non-gay characters, goes down in Episode 2 of the show’s final season — and trust me, it was worth the wait. I can’t say much more, but in case you’re wondering, this particular “love” scene is accompanied by strings.

Question: Revenge Season 4 — hit me! —Jacob
Ausiello: I am not a violent person, Jacob, but I’m about to smack you upside the head with a doozy of a Revenge scoop: Emily’s getting a major new love interest this fall. Details are sparse, but I hear the recurring character will be sexy (duh), charming (double duh) and full of secrets (I made that last one up, but, um, triple duh). Jack/Emily ‘shippers shouldn’t throw in the towel though. Revenge exec producer Aaron Harberts hinted to Variety.com that the bond between the star-crossed lovers will likely intensify in the wake of David’s resurrection. “There’s really only one character on the show who knows the relationship between David Clarke and the girl who was Amanda Clarke, and that’s Jack Porter,” he said. “In a year of Emily asking herself, ‘Who is Amanda Clarke? How do I get back to that?’ Jack’s going to play such a huge component in that.” Harberts also revealed that Season 4 will represent a major shift for the drama. “So much of the show was built on the past, but with Conrad being taken down and with [flight] 197 being put to bed, what we’re most excited about is now the show can start living and breathing in the present.” Speaking of Revenge, did you see this?! Question: Some Danny-related Mindy Project scoop would be nice. –Andi
Ausiello: Chris Messina tells TVLine that he’s hoping the Fox comedy will introduce Mrs. Castellano – AKA Danny’s mom – in Season 3. “She’s a vital force in his life. It would be cool to meet her,” he says. And don’t worry about dream casting; Messina’s way ahead of you: “It would be nice to have someone like Cher play his mom.”

Question: Is there any chance that Chris Messina will have a bigger part this season on The Newsroom? Thanks! – Ali
Ausiello: Bigger? Unclear. Better, in the cosmic sense? Likely. Messina says that the usually prickly Reese “has a whole lot of change and a major difference in his philosophy” in the HBO drama’s final installments. “People will be excited about the last season and bummed that it’s ending, because I think it’ll be a really good one.”

Question: Any word on how talks are going regarding Hulu picking up Community? Please tell me we haven’t seen the last of Annie’s Boobs. —Tom
Ausiello: I would if I could but I can’t. Unfortunately, I hear it’s looking unlikely that Hulu will come to the show’s rescue, although talks are continuing. Danny Pudi, meanwhile, tells us, “I’m not holding on to any hope. If it happens, great! If it doesn’t, I feel great about what we were able to accomplish.”

Question: Will Dana Tomas, Wu’s childhood crush and good friend, played by Tess Paras, return for Grimm’s fourth season? —Ole
Ausiello: There are no current plans for Dana to resurface, but I’d be shocked — shocked, I tell ya — if we don’t see here at least once in Season 4. Question: Is it too early for intel on Season 6 of The Good Wife? –Baron
Ausiello: Focus on the pocket watch swinging before your eyes. Now think back to the Season 5 finale and remember how Cary caught a glimpse of Deena Lampard — wife of Neil Gross (the CEO of Florrick/Agos’ biggest client) — on the should’ve-been-shut-off teleconference link from the Lockhart-Gardner conference room. “They have Mrs. Chumhum, and we’re screwed,” fretted Cary. Well, look for that story arc to rear its perilous head when the CBS drama returns in the fall. Megan Ketch, who plays Deena, “is very good, and we’re getting her back early next year,” promises executive producer Robert King. “So, you’re going to find [the fight for Chumhum’s business] is a continuing plot line. What Lucky Strike was to Mad Men, Chumhum is to us.” And indeed, King adds, the fallout from Deena’s flirtation with Lockhart-Gardner could potentially mess with Florrick-Agos’ future — and even its desire to bring Diane into the fold.

Question: Do you have any scoop on The 100‘s Bellamy/Clarke? —Stephanie
Ausiello: Well, Stephanie, the dynamic between Clarke and Bellamy will definitely shift in the season finale, but not necessarily the way you’re probably hoping. Romantically speaking, it’s all about Clarke and Finn — not that I’m guaranteeing a happy ending there, either. The 100 may be fighting for their lives, but that doesn’t mean Clarke and Raven won’t also manage to fit in a few moments of Finn-related awkwardness.

Question: Can we please get a scoop on Witches of East End Season 2? —Shuaib
Ausiello: If at all possible, the ladies of East End are upping the sex factor in Season 2, but I’ve got a surprise for you, Shuaib: The most surprising hookup on the July 6 premiere will come courtesy of Little Miss Key, herself. (Yes, I’m talking about Ingrid.) The who, what, where and why of her encounter are all pretty mind-blowing.

Question: Loved the gut-wrenching season opener of Major Crimes. Any idea when we will meet Sykes’ date? –Marijke
Ausiello: “Eventually” seems to be the answer. The very pretty MCDetective “is dating someone,” show boss James Duff confirms, “but she doesn’t want the others to know who yet. No police officer ever wants that — if you only knew the truth about what goes on in a precinct, especially when flowers show up! — so you have to throw down the gauntlet. But yes, we will eventually have to reveal all of that.”

Question: Last Sunday’s Devious Maids flashback revealed that Opal pushed Nicholas’ first wife Dahlia off a bridge, then bought his silence by threatening to expose his role in a second killing. I want to know, though, if Opal was somehow involved in Death No. 2, or if this one’s all on her rich boss. –Liesel
Ausiello: File under “there’s a first time for everything”: Opal bears no guilt in whatever nasty secret Nicholas is hiding — although the latter character’s portrayer, Mark Deklin, reveals that wasn’t initially the writers’ vision. “For quite a long time while we were shooting, the idea was that [Opal] was a part of [the second murder],” Deklin tells TVLine. “But at some point, that changed… Opal wasn’t directly involved. It’s something Nick and Dahlia did — but, of course, you can’t keep anything from your maid.” Question: Can I please have  whatever you have on Teen Wolf? —Natalia
Ausiello: By now, you’ve probably heard a lot about Dylan Sprayberry’s Liam, one of the new lacrosse players in Season 4, but a crucial question still lingers: What is he? That, Natalia, will be answered in the season’s third episode — and it’s not even close to the hour’s wildest reveal. Prepare for a gasp-attack.

Question: Aloha from Hawaii! I love your weekly column and always look forward to it. Do you have anything on House of Cards or Mistresses? –Mark
Ausiello: Mahalo, Mark! Maybe Mistresses? (Sorry, got a little alliteration-crazy there for a second.) Rochelle Aytes tells us that her righteous April is headed for the mother of all showdowns, so to speak, when daughter Lucy falls under the influence of a nasty rich-girl classmate at her exclusive private school. “You can expect April and this girl’s mother to clash,” Aytes tells us. “She’s buying my daughter Gucci bags, and now Lucy wants a cellphone, too.” The sudden onslaught of “rich people’s problems” — and the reality that, as a scholarship student, her mother can’t afford to send her on expensive trips — leads adorable Lucy to “start getting sassy and talking back,” Aytes previews. Not surprisingly, the actress adds with a chuckle, April’s response to the attitude change will be eerily similar to co-star Yunjin Kim’s Season 2 catchphrase that the ABC promo department has been playing for weeks now: “Can’t have that!”

Question: Anything you can spill on the new season of CSI? —Missi
Ausiello: A major serial killer storyline will permeate Season 15, and it will dredge up old (and extremely unpleasant) memories for Russell (Ted Danson).

Question: I’ll take whatever you got on Suits. —Matt
Ausiello: The new season (premiering Wednesday) will finally shed light on the all-knowing Donna. Explains EP Aaron Korsh: “We [get] some backstory into Donna through some of the things she talks about with Louis. Then we have one pretty fun episode where we get to see what Donna’s doing outside the office. You get to hear her talk about her decision to become a legal secretary and some of her family dynamics growing up.”

Question: Hi Aus! Love your work. Been reading for years. I’m also a HUGE 24 fan and I’ve been thinking… we’re seven hours in to this 12-hour season and we haven’t skipped any time. Are there still plans to skip hours or will we get only 12 hours of this “day”? —Christian
Ausiello: It’s interesting that everyone assumed the show would skip an hour here and there vs. staging one big 12-hour jump at some point during the run — and we know what they say about people who assume. Did that answer your question, Christian?