During Grimm‘s six-season run on NBC, members of its tight-knit cast often would gather to live-tweet the supernatural drama as it aired. Sometimes the watch-along party included most of the show’s ensemble cast. But “sometimes, the girls just did their thing,” Bree Turner recalls. “The three of us just did our thing.”

Claire Coffee, who along with Turner and Elizabeth “Bitsie” Tulloch made up the supernatural series’ female contingent, nods. “We would get together at Bree’s condo,” she says, chuckling. “We have pictures of this.” Tulloch pipes up: “We’d have pizza and adult beverages, and we would live-tweet with everyone.”

Now, five years after the show came to a close, Coffee, Tulloch and Turner are getting Grimm‘s girl gang back together. 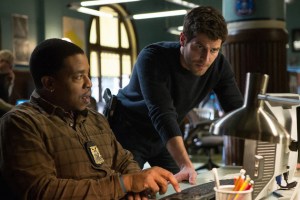 The actresses host The Grimmcast, a new podcast in which they’ll rewatch every episode of their former show and, per the official synopsis, “share behind-the-scenes stories, show lore and of course talk to special guests along the way. They’ll also answer fan questions and highlight stories from the Pacific Northwest,” aka Portland, Ore., where Grimm filmed. The podcast launches today.

For those not in the know: Grimm followed a Portland Police Department detective named Nick Burkhardt (played by David Giuntoli) as he learned about, and came to accept, his calling: He was the latest of a mystical line of hunters destined to fight fairytale beasts called wesen, who appeared as humans to everyone other than Nick. Be that as it may, as the show went on, some of Nick’s closest friends — including his onetime girlfriend and his eventual baby mama — were wesen. The cast also included Silas Weir Mitchell, Russell Hornsby, Sasha Roiz and Reggie Lee.

TVLine recently chatted with Turner, Tulloch and Coffee to reminisce about wesen, woging and whatever was going on with Giuntoli’s hair in Season 1. Keep scrolling to read on for the highlights.