In the end, Grimm‘s devil is defeated by a tiny detail.

Granted, that detail — that Nick must willingly give Zerstörer the magic stick in order for the otherworldly demon to complete his all-powerful staff and bring on the apocalypse — doesn’t make itself apparent until the eleventh hour, when our hero thinks he’s lost everyone he ever cared about.

And the lead-up to that moment is truly devastating: One by one, each remaining member of the team falls prey to Zerstörer’s wrath, until Nick and Trubel are the only pair standing.

PORTLAND’S DEADEST | When Nick wakes up after Zerstörer bats him down like a cat with a moth, he immediately presses the stick into Wu and Hank and begs it to bring them back to life. It doesn’t. “Why isn’t this working?!” he screams, but no one’s around to hear him: Everyone in the precinct — including Officer Franco — is dead, and Zerstörer has ghosted. Trubel arrives on the scene, and they quickly reach a consensus: “If bullets won’t kill him, we have to do this the way our ancestors did: Cut off his head.”

At the Spice Shop, Monroe, Rosalee and Eve think they’ve found a spell that’ll stop Zerstörer: It involves mixing the blood of a Grimm, a Hexenbiest and a Wesen, and it’s rarely used. But their excitement is tamped down when Nick, seemingly in shock, arrives at the shop to announce, “We tried to fight him, but he killed everyone.” (Side note: If you’re looking for a quick, easy way to reduce me to a heap of feeeeeeeelings, play me Silas Weir Mitchell’s masterful reading of the line, “What do you mean, ‘everyone’?” The way his voice breaks! So much grief packed into so few words!) Gobsmacked by the loss, the trio fills Nick in about the potion and he’s on board. (Side note: If you’re looking for a quick, easy way to make me squeal with excited glee, play me Bree Turner’s masterful reading of, “GET ME A THERMOS.” Such. A. Boss.) 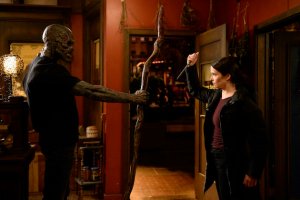 EVE, OUT! | With the potion nearly done, Monrosalee head to the cabin, and Eve and Nick plan to follow soon after. Eve laments that she’s no longer a Hexenbiest and can’t contribute her blood to the spell. Still, she defiantly states, “I have no regrets, and I am definitely not done.”

It’s a great line. Too bad she dies nearly immediately after uttering the last syllable. Zerstörer busts in, throws Nick across the room and forces Eve to stab herself in the abdomen with the knife she’s brandishing. As the monster disappears again, Nick grabs Eve and holds her near as she starts to die. (Again.) He calls her by both of her names, but she whispers, “No regrets” and is gone. He cries for a second, then carries her to the bed (I’ve said it before, but that poor bed has SEEN SOME STUFF) and rubs the magic stick all over her. (Not a euphemism.) It doesn’t work. So the enraged Grimm grabs a battle axe and smashed the shop to bits.

THE RING THING | At the cabin, Adalind and Renard take advantage of a rare quiet moment to apologize to each other for, basically, Seasons 1-5. “We did one thing right,” he says, and she replies, “Diana.” Aww. Their discussion of how she hasn’t tried to take off Bonaparte’s ring since his death — she’s afraid the mojo will still hurt the kids — is interrupted by Trubel’s arrival: Nick has dispatched her there to keep watch, but she’s not happy to see Meisner-murderer Renard there. “You’re supposed to be on our side now?” she asks sarcastically.

When Nick arrives, bearing even more bad news, he’s all business: He and a woge’d Adalind and Monroe stack their hands on top of each other, then Renard (with Trubel’s help) pushes a dagger straight through the middle. The resulting potion is superpowerful, and it’s ready, which is good. Because Diana alerts the gang that Zerstörer is on his way, and he can find Nick by tracking the stick. 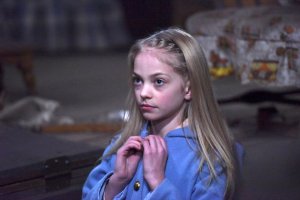 AND THEN THERE WAS ONE | When the devil arrives, Diana opens the door for him like he’s the cable-repair guy. Thanks, kid. And then everything starts to move very quickly.

Renard is the first to go after the beast; he’s also the first to die, on the ground outside the cabin. Monroe then throws the poison potion in Z’s face, but it only slows him down for a moment. That’s when Adalind realizes that ish is getting really really real real and screams for Trubel to take the kids and run, but Zerstörer locks them in the house. Adalind uses her hexy powers to wrest an axe from the demon, but he takes it back and buries it in her throat. “Save Kelly and Diana,” she begs Nick as he runs to her side and watches her kick it.

Rosalee grabs the staff; Z turns it into a snake that bites her in the throat. Monroe woges and grabs the reptile off his wife… and then it bites him in the throat. They both fall to the ground, bleeding heavily; Rosalee succumbs to her wounds first, dying a moment after she and the Blutbad share one last look.

As Monroe is gasping his last breath, Nick speeds to his friend’s side and takes his hand. “You can’t, you can’t,” he chants, but Monroe does. Nick falls on his best friend’s dead body and yells an anguished “No!” into the night sky. At some point, I realize I am laughing in that terribly inappropriate way that sometimes happens to people at funerals, because good Lord, we’re only about halfway through this episode and EVERYONE IS GONE.

WELL, TWO, ACTUALLY | Oh wait, not everyone: Trubel is still inside with the kids and — oops, I spoke too soon, because Zerstörer kills her, too. But when Nick and the evil creature come face to face, Z brings Trubel back to life and says he can reverse everything if Nick will just give him what he wants.

“I can give them all back to you,” the strapping villain says, and Nick is just about ready to give in — despite Trubel’s vehement objection. “This isn’t about us or the ones we love,” she reminds him, but he doesn’t wanna hear it, and they wind up coming to fisticuffs in the forest. Still, Nick is determined to give Zerstörer the stick and be done with it… until the sky clouds over and he hears a woman’s voice.

“You can’t do what you want to do,” she says, and when Nick looks around, he sees his mom (!) standing next to him.

OK, GRIMMS, NOW LET’S GET IN FORMATION | Yep, the original Kelly Burkhardt is back — and she brought Aunt Marie with her, too! Dead, schmed! They fill him in that he has to willingly give Zerstörer the stick, but he mustn’t: “If you do this, you will sacrifice the world to endless pain and suffering,” Marie warns. But his Grimm blood will see him through, the women remind him, and they’ll be there to help. So Nick walks back to the cabin to fight, flanked by the powerful females in his bloodline, and with that shot of the three of them leading into commercial, I AM OVERCOME.

The final battle doesn’t last that long, and #TeamGrimm wins — though Trubel is unable to see Kelly and Marie fighting alongside them. When Zerstörer is nothing more than a smoking skullface, Marie and Kelly task Nick with guarding the completed staff with his life from here on in. And “take care of my grandson,” Kelly adds. “I like his name.” Then Marie and Kelly are gone. (Aw, guys!)

EVERY TIME A BELL RINGS, A GRIMM GETS HIS WISH | Nick realizes that he can use the staff to bring everyone back… but then Z’s body does a weird thing and turns into a portal back to that other creepy world. And when Nick won’t let go of the staff, he’s pulled through the vortex…

… and he and Eve land in Monroe and Rosalee’s living room, just like they did in the when they came back from the Black Forest-y looking realm. In fact, it is the exact moment they came back, and everyone except for Diana is completely unaware of the events we’ve spent the last hour witnessing. (As for Diana, she was able to see Kelly and Marie, and she confirms to Nick that Zerstörer didn’t come back with him and Eve this time.) Also? Eve is still a Hexenbiest, which is good news, which is serious evidence of how far we’ve come since the series premiere.

Even better, Adalind’s ring is gone, a fact Nick notices while he’s hugging everyone like it’s his job. “I felt what it would be like to lose all of you, everyone I ever loved, anyone who ever meant anything to me,” he says, having time and space to process intense emotion for perhaps the first instance in the show’s entire run. “My family.”

He kisses Adalind. He rejoices when Trubel, Hank and Wu show up. It’s all very It’s a Wonderful Life there in Monrosalee’s front room, complete with a group embrace to round out the scene. And when we hear someone narrating it — and a title card that indicates we’ve jumped 20 years into the future — we learn that Kelly does, in fact, have some powers: He’s now a Grimm (with some very Season 1 Nick hair), and he, a grown-up Diana, Nick, Adalind and Monrosalee’s triplets are carrying on the good fight — complete with an airstream trailer command center where Zerstörer’s staff is just another weapon in the armament closet. 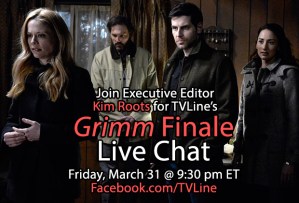 Now it’s your turn. What did you think of the series finale? Grade the episode via the poll below, then hit the comments to expand upon your thoughts!