Will Criminal Minds‘ BAU face an in-house adversary? Will Walker reunite with Geri? Has Stranger Things‘ Nancy/Jonathan ‘ship been sank? Read on for answers to those questions plus teases from other shows. (You can and should email any brand-new Qs to InsideLine@tvline.com.)

Any scoop on Criminal Minds’ upcoming Season 16? –Dennis
Hey, would it really be Criminal Minds if there wasn’t some clashing with the Bureau’s upper management? I am hearing that in the Paramount+ revival, Prentiss’ role as team leader will be challenged by a new deputy director who doesn’t quite share her view on how best to run the BAU. (Grrr, sounds like this new suit needs to binge Seasons 2-15.) 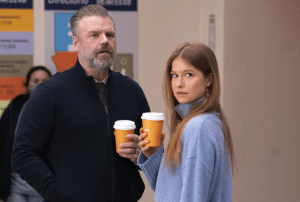 Will Genevieve Angelson be doing both Handmaid’s Tale and New Amsterdam? –Craig
I’ve actually heard that Angelson already wrapped filming her Season 5 Handmaid’s role. Even so, there are currently no plans for her to return to New Amsterdam (for its farewell run), where last season she recurred as Dr. Mia Castries.

In Season 2 of Fox’s The Cleaning Lady, will we get some backstory on how Arman hooked up with Nadia? –Yolanda
Executive producers Melissa Carter and Miranda Kwok confirm for Inside Line that as Season 2 begins unspooling on Monday, Sept. 19, “We’ll reveal more about their backstories when Nadia’s ex-lover enters the picture and drives a wedge between Arman and Nadia. Now standing to lose everything, Arman has to fight to keep his world — and his dignity — intact.”