In the Season 2 finale, “The Telling,” Sydney realized she’s been living with Francie’s clone. The two women then had a house-destroying fight that left Sydney unconscious. The scenes were shot at the very end of the production season. 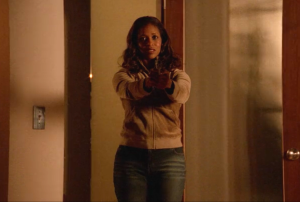 DUNGEY | You know, there’s not a week that goes by that somebody doesn’t talk about Alias or say something to me like, “Francie doesn’t like coffee ice cream.”

GARNER | My overarching memory was that J.J. was directing it, and that it was one of those moments where he had wanted to do a fight so badly for so long. He was so happy, and [Dungey and I] were so happy to be fighting each other. It was an interesting time to end the season. It was just so right. And it was my birthday.

DUNGEY | It was Jen’s birthday. They brought in this tower of sticky buns, and everyone was eating sticky buns.

GARNER | I remember my stunt double, Shauna, taking a big hit. I think she had to jump over a countertop and land on her back. She giggled — and whenever she giggled at the end of a take, I knew she was hurt. And so I just remembered everyone laughing because she was laughing, and me having this sick spike of fear in my chest, because I can’t bear for Shauna to be hurt. But it was a walk-it-off kind of a hurt. She’s so tough.

SHAUNA DUGGINS, Jennifer Garner’s stunt double | I remember going over that counter and hitting the ground. That was a really hard hit.

DUNGEY | We rehearsed a lot… It was so choreographed, and the fight was actually a hell of a lot longer. We had to cut some of it. There was a whole thing where I was like going to be on a harness and do a flying — I can’t remember what it’s called — but this like flying kick to her chest, and we had to cut it [for time]. I mean each day when we shot it was a 16- or 17-hour day.

DUGGINS | It was typical J.J. style, which I love. He wants to use the environment. He wants it real and messy and Sydney-style…The fight made its way through the house and didn’t leave much untouched.

GARNER | I remember somebody saying, “It’s lunch on the last day. We’re almost there!” And I started to cry, [Laughs] because I said, “We’re never going to get there!”

DUNGEY | We had to destroy the house in order… Everyone was so excited. It was so amazing, and then when they were like putting the squibs on me, I was like, “Why is it near my heart? Am I dying?” They didn’t say like, “That’s a wrap on Francie!” — and it wasn’t — but I was worried. There were a lot of tears.

The final moments of Season 2 found Sydney waking up in Hong Kong and getting a visit from Vaughn, who informed her she’d been missing and thought dead for two years… and in that time, he’d gotten married.

GARNER | I could cry thinking about it. I cried so much for her during those first episodes of that season… Only J.J. would think that kind of thing up. He’s so clever, and it was such a great idea, and it gave us so much to play. It did spin us all in a whole different and new direction, which was perfect. But I remember: If you were gutted, I can’t even tell you, it was like it was happening [to me]. 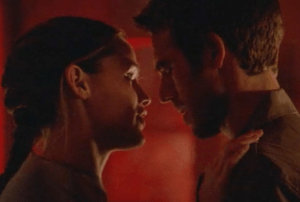 VARTAN | I thought it was great. You know, so many unanswered questions. It lent itself to so many diverse and vast storylines. We didn’t know what direction J.J. was going to take it, in but I thought that episode — that scene when I find her again after two years in some downtown Hong Kong apartment and now I’m married to another woman — was one of the most emotional scenes I shot on the show. Ken Olin directed that episode, and it was really, really heavy. For a minute there, you stopped feeling like you were making a TV show. It felt like we were shooting Sophie’s Choice or something.

PINKNER | The most internally controversial [storyline decision] was what to make of the two years that Sydney was missing, and J.J.’s decision was to keep the story alive and she had been doing operations in disguise and she didn’t remember

SEASON 3
The drama moved to a more episodic format in its third season. Bradley Cooper and Merrin Dungey exited the series; Mia Maestro (as Sydney’s half-sister, Nadia Santos) and Melissa George (as Vaughn’s new wife/secret double agent Lauren Reed) joined the cast. By that point, Garner and Vartan had briefly dated but were no longer together, and Abrams was less involved in Alias‘ day-to-day operations as he focused on his upcoming series, Lost.

ABRAMS | The first two seasons were what I wanted the show to be. And then [ABC] said in Season 2, “This is the last season you can make it serialized. It has to be a standalone show.” And so Season 3 began the season where it was episode-to-episode.

PINKNER | At the end of Season Two, Bob [Orci] and Alex [Kurtzman] were leaving, Josh [Appelman] and André [Nemec] joined. [Producers] Alison Schapker and Monica Breen joined right around the same time. All those people have gone on to phenomenal careers. Rick Orci, Bob’s younger brother, joined at a certain point. [Producer] Drew Goddard came in for the last two seasons. But I ended up running the show in the last couple years.

APPELBAUM | It was always about the saga of Sydney Bristow, the whole world that was created. I think in a nice way, what that mandate forced us to do was to tell standalone stories within the mythology. There’s always the mythology going, but it was nice to feel like to some extent each episode had its own individual satisfaction and the show wasn’t just this one long run-on sentence.

GARNER | I preferred the more serialized version. Now, people would binge-watch it, and that would be OK. J.J. was… ahead of his time in some ways.

Cooper left after the season’s 10th episode, in which Will — now in witness protection — kills Allison Doren. Though Cooper declined to be interviewed for this piece, in 2013 he told GQ he wanted to “f—king kill myself” while on the show and that he asked to leave before Abrams could fire him.

ABRAMS | I think that’s right, only in that we weren’t coming up with things that were worthy of him, and he was sitting around in many episodes doing very little. It felt like that kind of relationship where you both love each other, but you both realize for various righteous reasons that it’s not quite working out. And you both come to a meeting with the same intention. That’s sort of what happened. It was very hard to go back to the domestic stories when there is a nuke in Los Angeles somewhere. It was a really tricky plate to spin.

GARBER | Bradley is one of the most talented people I’ve ever known, and we all knew — I knew, certainly — that he was going to go on to do great things. The role just wasn’t very challenging for him, and I think they didn’t actually know what to do with the role, to be fair…. It was all very amicable and yes, we talked about it a lot. I mean, I didn’t want him to leave, because I loved him. But of course, it was the right decision.

ABRAMS | It was more an issue of the paradigm of the show than anything else.

After Dungey’s departure, she’d show up one more time, as Francie in a flashback during the series finale.

DUNGEY | My greatest, not regret, but disappointment, I guess, is I feel like the Allison Doren storyline never… I’d rather you sew it up completely… It was great to come back for two of those episodes in Season 3, but I still feel like, “Is she dead? Did she die? Like, what happened?” …I think that there could have been other ways in which Allison Doren could have been used.

While we’re on the topic of alternative storylines, Anders recalls discussion of a potential Sydney-Sark romantic plot. 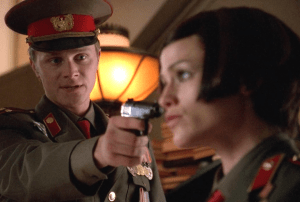 ANDERS | I was told that that was the initial plan for them, to have them hookup at some point, but that just never happened.

APPLEBAUM | We were playing with the idea in our minds, figuratively speaking, and I think we were like, “Sydney would never sleep with that a–hole. She’s too smart and cool to fall for that guy’s s–t.” I think we may have walked up to the line, because it certainly was a provocative idea, but yeah. For Sydney’s sake we couldn’t go there, because I don’t think she would go there. [Laughs]

ANDRÉ NEMEC, co-executive producer | When [Appelbaum and I] came onto that show, we walked right into a very well-oiled machine of smart people doing smart work… J.J. used to use the phrase… “What is this particular writer’s super power? Are they great at story? Are they great at character? Are they great at set pieces? What is the element that they bring in a great way in the show?” And you know, it was like the Justice League. 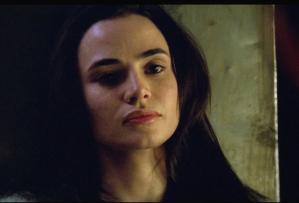 APPELBAUM | I don’t remember who it was — it probably was J.J. — but somebody said, “What if Sydney had a sister?” Suddenly everyone’s like “F–k yeah!”…Then J.J. was going through a script… and in his rewrite of it, as this guy is dying, [Abrams] added this line in. The person dying said, “Find the passenger.” We in the writers’ room were like, “Who’s the passenger?” J.J’s like, “I don’t know. It’s sort of an interesting idea. Let’s talk about it.” It just felt like a compelling thing. By the end of the day, it was like, “Wait a minute: What if the passenger is Sydney’s sister?” Tie those two ideas together and that sort of took root, and it was game on.

PROCEED TO NEXT PAGE FOR SEASON 4: “WHY AM I A VAMPIRE?”