GARNER | I might have just about lost the job in the middle of the pilot. One day, [Abrams] said to me, when we had been shooting a couple of days, “Meet me at the Chateau Marmont and let’s have a cup of coffee.” Which was so weird. I lived down the road from J.J. I have forever. I don’t need to go anywhere to meet him. I know him. So it was really serious. We had a real conversation where he said, “There are times when you really drop into the character, and there are times where…” basically that I wasn’t hitting it right. I don’t know if he was just trying to just encourage me to take it more seriously. Maybe I was having too much fun. I’m not sure. But I do know that after that, we went a little deeper, and we went after it a little [more]. I guess it worked, because I didn’t get fired. 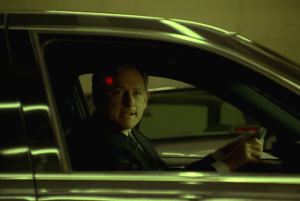 GARBER | I don’t think I’ve read a pilot that good since then. The script I read that was as good as that was Argo.

GARNER | Getting to work with J.J. towards the beginning of his career was just a great gift … But he’s not J.J. by accident. He is the most inclusive, team-building, collaborative person… He makes everyone on the set feel absolutely important to the fun of the set, to the fun of the day, to the work at hand. And I’ve really been lucky enough to carry that with me into everything else that I’ve had the privilege to do.

SEASON 1
ABC greenlights Alias. The premiere airs Sunday, Sept. 30, 2001. The production schedule is tough for everyone involved, and Garner’s day-to-day work is particularly grueling, but the mood on set tends toward a fun sense of teamwork.

GARNER | One of the best things about that show specifically was that I was surrounded by these actors whom I revered. I mean, when I lived in New York in my early 20s, I saw four different shows starring Victor Garber. And not only did I see them, I stood in the back and paid Standing Room Only ticket prices, because I couldn’t afford to sit down. So for me, working with Victor was the highlight of anything that I’d done so far.

At the time I did the pilot, I think I was 28. So I wasn’t a little kid. I was old enough to know that I was lucky to be working with these actors from the theater world whom I looked up to so much. That, to me, set the tone.

PINKNER | Because we had Ron Rifkin [who played Arvin Sloane] and Victor Garber, who were unbelievable pros, they from the beginning took her under their collective wing, by osmosis and also certainly in some cases by their own behavior — like “this is the way to be a professional.” Then she, by force of will, created this family that went across the entire staff.

GARBER | It’s something that I just instinctively do, as I’m very controlling. [Laughs] Listen, of course I took Jennifer under my wing. I was playing her father, and also because we had this kind of extraordinary connection right from day one and we still do. 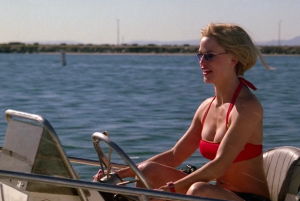 GARNER | I really didn’t [have a life]. And that’s what it required. My weeks…it sounds like a joke… When you talk about an 18-hour day, you really are going in at 5 in the morning and you really are coming out in the, you know, close to midnight. It really is that long of a day.

Often, I would start with the first unit and overlap in the middle of the day and be working on two units and then I would finish with the second unit. So the crew had gone home because of their overtime… and I would stay put and do both. And then go home and learn eight pages and get up and work out and do it all again.

KEN OLIN, executive producer | The worst thing Jen would ever do is just after working 14 or 15 hours, she would get cranky and she would say, “I’m getting cranky…” She would never ever act out in a way that was unfair or irrational, blaming people. Never.

GARNER | I remember, I was getting out of shape because I never had time to work out… We were starting at 5 a.m. or something, and I said [to Carl Lumbly, who played Marcus Dixon], “I didn’t get to work out. I don’t know what I’m going to do. I feel like my body’s going to change, and I won’t be able to do the fights.” And he said, “Well, I went for a run this morning.” I said, “What are you talking about? We started at 5!” He said, “Jennifer, I ran at 4.” He said, “You can always get up earlier. You can always do half an hour, always.”

And when they talk about, “Oh, Jen worked out at [an ungodly hour],” it started that day. Because I felt like if Carl can do it… Of course, he’s right. You just have to dig deeper. You have to have more discipline. And I did. I did absolutely work out at whatever time was required so I could show up warmed up and ready.

CARL LUMBLY, played Marcus Dixon | With everything that she had to do on that show, the thing I regarded her for most was she kept her balance. She kept composure.

VARTAN | We’d shoot eight or nine days for each episode. At least two or three of those days were nights, because to make the Disney lot or downtown Burbank look like Algeria or eastern Bulgaria, you’ve got to shoot at night… A lot of our night shoots were in San Pedro, at the docks there. You’re driving home on a Friday morning at 7:30 after a 14-hour day and you’re in bumper-to-bumper traffic. People are going to work and you have to be back on set at 5 pm for another night shoot and you’re just exhausted.

OLIN | It was a good feeling to be exhausted, and we were really exhausted a lot.

As a result of the long hours, the cast and crew grew very close.

VARTAN | The first season, we watched the show together at everyone’s rotating house and just had a little party. It was one of those incredible experiences where the people you work with are amazing actors, but even better people. It was amazing. To this day, Victor and I are incredibly close.

PHOTOS Alias and 24 Other Shows You Want Remade or Revived Now!

GARBER | Bradley would come over to our house all the time and eat. I was living there with Rainer [Andreesen], who I’m now married to, and at that time, we had a house near Hancock Park. There were a lot of gatherings. Ron Rifkin and Iva, his wife, we’re very close to them. Michael Vartan, Ken Olin and his wife Patty Wettig, we loved to hang out, and J.J. and Katie, too… We liked being with each other. It was just one of those things that doesn’t happen. It hasn’t happened to me before or since.

RON RIFKIN, played Arvin Sloane | I was closest with Victor, Jennifer and Bradley. But then Bradley left, I guess, in the second year… We’re still close. Then Victor and Vartan were very close… And Carl Lumbly is a prince.

GARBER | There was one time where Ken Olin sent Jennifer and I to our trailers because we couldn’t stop laughing. 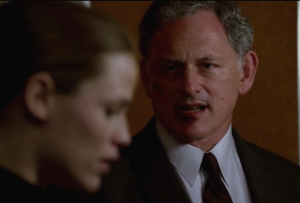 OLIN | The two of them were goofballs. If the absurdity of a situation suddenly struck one of them, the other — almost through osmosis — instantly broke up, and we were done for.

MERRIN DUNGEY, played Francie Calfo | It was just exciting to experience this with such a lovely group of people.

LUMBLY | We operated much more like a theater company. In that regard, it was much more about what was the task at hand, what was the play that day. I tend to be pretty collegial, and I like people who come to work to make it right. So I felt great about everybody.

VARTAN | I’ve been in this business for 30 years. It was, hands down, the greatest human experience I’ve had in the business by far.

PROCEED TO NEXT PAGE FOR SEASON 2 AND RAMBALDI: “I HAD NO IDEA WHAT WAS GOING ON.”