Because, seriously, it’s time for The Masked Singer to hang it up.

Tonight marked the Season 8 finale of Fox’s bizarro singing competition. If you’re uninitiated, here are the basics. The show, an American version of a South Korean format, showcases “celebrities” (the quotation marks will become evident in a few moments) who don elaborate costumes and perform covers of popular songs while a panel of judges attempts to guess which well-known personality is behind the mask. Each episode also includes several clues about the performers’ true identities. 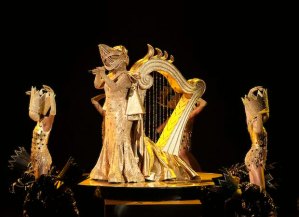 The Masked Singer debuted in 2019 and, yeah, it was fun for a while! Silly fun. Mindless fun. The kind of fun you could watch with your grandma, your kid and/or your cat, and everyone would have a good time. Week to week, audiences tried to discern the contestants based on little more than their voices, the clues and the guesses that judges Ken Jeong, Jenny McCarthy, Nichole Scherzinger and Robin Thicke would toss out during the broadcast. (Not that that last part helped much, given how wildly unrealistic the judges’ suggestions often were. No, Ken & Co., Denzel Washington was never going to be under the sequins and feathers.)

And when COVID-19 had us all huddling at home, scared and looking for various manner of diversions to take our minds off a very frightening reality, of course The Masked Singer was exactly the type of thing we wanted as a break from doomscrolling and washing our produce with dish soap.

But the show often made choices both bizarre (Gladys Knight came in THIRD?! behind Donny Osmond and T-Pain in Season 1) and arbitrary (that sorta/kinda/not really fan voting thing), and two relatively recent developments should serve as its death knell.

First, the decision to have former New York City mayor/President Donald Trump crony Rudy Giuliani compete as Jack in the Box in Season 7 was a crass grab for… notoriety? Red state love? I’m still not sure.

Second, this season’s major format change had only one singer move on each week, gutting the week-to-week suspense that was more than half of the show’s fun. Because if I’m going to dither about whether someone wearing an oversized giraffe costume is Beverly Hills, 90210 alum Brian Austin Green or Backstreet Boy Nick Carter, I want to work for it, damnit.

The whole shebang just feels tired now. And to my earlier point about “celebs”: This season’s unmasked players have included Blossom’s Joey Lawrence, Exorcist star Linda Blair, Ghostbusters crooner Ray Parker Jr. and The Brady Bunch boys — most of which would be meh gets even if this show were airing in 1992.

For the record, this season’s winner was Harp, who was revealed to be Glee’s Amber Riley. The runners-up were Lambs, a three-person entry that was revealed to be girl group Wilson Phillips. And to invoke that trio’s biggest song, while I know things can change, and things could go my way, I definitely hope the show does not hold on for one more season.

But if you disagree, cool. You’re in luck: The show’s holiday special airs next Wednesday at 8/7c.

Do you want more Masked Singer? Hit the comments and let us know!