To quote a classic line uttered often by Saturday Night Live troop member/The Masked Singer guest panelist Kenan Thompson: What up with that?! 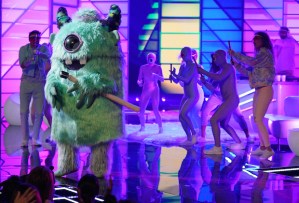 And Bee was the third-place finisher. Seriously?! Given who she was revealed to be, that’s a travesty.

To find out how everything shook out — including who was in the other costumes, and who took home the golden mask trophy — read on.

PEACOCK | After a big group number with all of 12 the contestants, the bird kicked off the solo performances with an on-brand number (Ray Charles’ “Shake a Tail Feather”) that included traipsing through the audience with a cadre of backup dancers in tow. As he has done throughout the season, Peacock gave an excellent, crowd-pleasing turn. (My guess: Donny Osmond.) 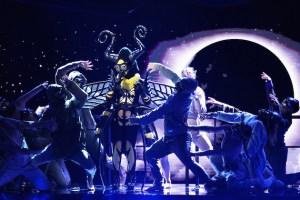 BEE | The intriguing insect quieted things down with a soulful, simple yet elegant cover of Bonnie Raitt’s “I Can’t Make You Love Me”… and did anyone else catch Thompson tearing up on the panel as the song hit its crescendo? Thompson then doubled down on what he said last week: That Bee is Gladys Knight. I concur. (My guess: Gladys Knight.)

MONSTER | Monster once more proved his versatility by singing Montell Jordan’s “This Is How We Do It,” complete with quite a lot of footwork for someone wearing, as Thompson pointed out, “a furry trashcan.” (Seriously, can he please be a full-time panelist next season?) (My guess: T-Pain.)

THE UNMASKINGS | Bee came in third, and when her helmet came off, she was, indeed, Grammy-winning recording artist Gladys Knight. Peacock came in second, and he was revealed as all-around entertainer Donny Osmond. And that left Monster, who won the whole shebang and who was shown to be rapper/singer/Auto-Tune enthusiast T-Pain.

Now it’s your turn. Grade the finale via the poll below, then hit the comments with your thoughts on the final unmaskings!