We’ve got questions, and you’ve (maybe) got answers! With another week of TV gone by, we’re lobbing queries left and right about shows including Shameless, Counterpart, Legacies and Gotham! 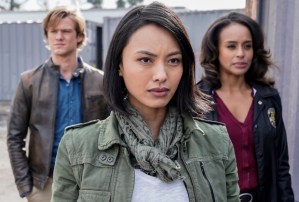 1 | Were you surprised that MacGyver delved straight away into Desi’s own Dark Mysterious Backstory (complete with flashbacks), versus save it for a future standalone episode?

2 | Why would True Detective‘s investigators accept a typewritten, impossibly vague “suicide note” as definitive proof that Tom Purcell committed the crime… especially after they already convicted the wrong man under similarly sketchy circumstances?

3 | Hindsight is 20/20, but shouldn’t Counterpart‘s Emily have relayed/yelled to the others the 11 pm train intel as soon as Indigo’s Ethel shared it? 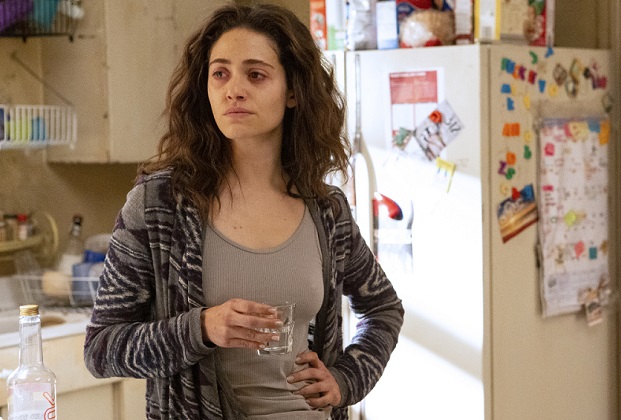 4 | Shameless fans, are you disappointed that Fiona is going out on such a down note?

5 | On Supergirl, do Dreamer’s powers automatically come with fighting skills? And if Alex had already gone out with Becca for drinks (twice), why did Kara need to get her number? Wouldn’t Alex already have it in her phone?

6 | Did the Good Doctor promo that ran ahead of Daniel Dae Kim’s debut completely spoil the end of this week’s episode, when — spoiler alert! — Han told Shaun that he’d no longer be allowed to work in surgery?

7 | Manifest‘s Cal throws a violent tantrum and says he can only speak to Zeke, but Ben takes his sweet ol’ time relaying that request to Michaela? (“I was going to swing by your place…”?) Also, was one of the most creative things about the freshman drama was how the plane flew through the logo?

8 | How loudly did you scream when Splitting Up Together showed a pregnant Lisa Apple being wheeled into the same hospital as Lena and Martin just moments after they got back together?

9 | The way that The Rookie‘s Lucy handled A) being run off the road, B) the ensuing foot chase and C) shootout, and then D) going mano a mano with the gun-wielding thief, did you think she was, like, Steve McGarrett? 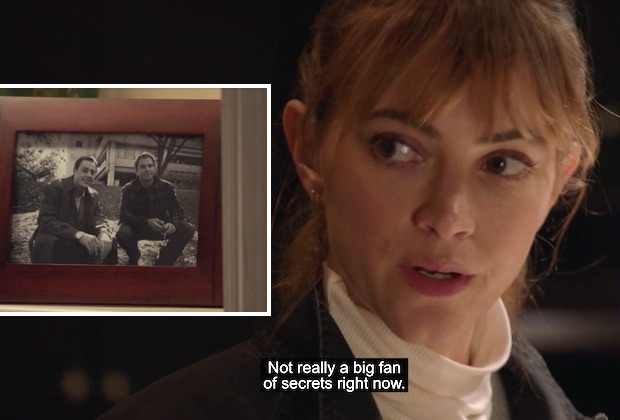 11 | Were any other Real Housewives of Beverly Hills fans gobsmacked to learn that not only is Denise Richards’ boyfriend still married to Nicollette Sheridan, but that Sheridan was also briefly married to Lisa Rinna’s current husband Harry Hamlin? (Bonus connections: Did you know that Sheridan also dated Eileen Davidson’s brother-in-law, as well as Kathryn Edwards’ current husband? How can one human have so many Housewives connections?!)

12 | Who do we have to lobby to get Saturday Night Live‘s Kenan Thompson on The Masked Singer‘s panel next season? And why did Fox rob itself of another sure-to-be-highly rated episode by unmasking not one but two celebrities this week?

13 | Do you think you have a bizarre-enough hobby to be a Match Game contestant? (“I like to make tiny foods”??)

14 | When You’re the Worst‘s Jimmy had that, um, very delicate favor to ask of a male friend, why didn’t he turn to his always eager-to-please BFF, Edgar?

15 | Why didn’t Grey’s Anatomy wait until next Thursday — when the show becomes TV’s longest-running primetime medical drama — to have Meredith break the record for performing the longest surgery in the hospital’s history? 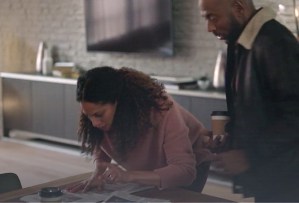 16 | We’re glad A Million Little Things‘ Regina got a good critique, but what newspaper runs restaurant reviews on the front page? And to TVLine reader LaurelNev’s point, if Theo was truly experiencing a night terror, why did he climb out of bed… traverse the house… and wait until he was directly in front of his parents before “launching into his performance?”

17 | How did Legacies‘ Alaric not feel the slug when he swallowed his drink?! And did all the boozy bar scenes make you miss Alaric’s drinking buddy Damon?

18 | How to Get Away With Murder‘s Simon is totally going to appear in next week’s finale somehow, now that Annalise has mentioned his absence, right?

19 | If you had a nickel for every Gotham character who repeatedly vowed to kill Penguin and had chances to easily kill Penguin, and yet didn’t kill Penguin, how rich would you be? Also, if you watched the most recent trailer, were you frankly astounded by how much of this week’s episode it spoiled?

20 | Why do The Orville‘s security chiefs double as Uhura-like communications officers on the bridge?

21 | Unless The Big Bang Theory‘s Professor Proton airs live, why would Sheldon hurling on William Shatner have made it to air?

23 | Does it seem like Trevor Noah is taking a little too much delight in Jussie Smollett’s quagmire?